The main source of inspiration for this idea was to match the keyboard shortcuts themselves to different keyboard layouts. Right now, users who don’t use US keyboards have to memorize the location of the keys, rather than to use the actual character location to be able to use the shortcuts. Those involving this region are primarily the case:

And here’s an example of confusing shortcuts:

Although this problem could be solved by just rebinding the shortcuts to the actual character and not the location on the keyboard, I’ve noticed there are some other issues concerning key bindings.

On this forum post, a member of the community asked for help on backing one layer level with a different shortcut from what Figma has right now. This makes the user adapt their workflow to the tool, and not the other way around — and that hinders efficiency. It would be nice if the tool itself provided some sort of customization on this regard.

Although being a workaround, Mac users can customize keyboard shortcuts by application, but it is a bit limited. It’s also not a possibility for Windows users.

I think this could be a game-changer, as i’ve seen people who refused to migrate from other tools to Figma because they couldn’t customize shortcuts. It would also give the user more control over the tool and their workflow.

What do you guys think about it?

84 Likes
Customize Keyboard Shortcuts
Is it possible to edit keayboard shortcuts?
New Quick Actions Menu! :zap:
The importance of customisable shortcuts
New Quick Actions is a regression
Toggle Show/Hide UI not working on Windows since Ctrl + \ can not be pressed
Keyboard shortcuts customization
Alt hotkeys?
Full custom shortcut support in MacOS
Shortcut search tool
Allow us to customize keyboard shortcut bindings
Hi. I have a problem with MacBooks shortcuts in Figma
[FIXED] Comments - Shift + C hides, but I need capital C's!
Remove New Tab
Why hotkeys so horrible?
Custom Keyboard Shortcuts
How can I zoom in & zoom out with alt key?
Please add a feature that we can add our shortcuts to the figma
Hotkeys for title/heading/subtitle/normal
Assignable keyboard shortcuts for plugins, PLEEEAAAASE!
Customize editor shortcuts
Bruno_Figueiredo January 26, 2021, 11:36pm #2

The mapping keys on your own keyboard is still a good in-between for sure.

I found some that work on my keyboard and some that are global but don’t show up in the Figma documentation (like CMD/CTRL + P that works for search).

Can we have an ability to customize our own keyboard shortcuts in Figma please ? 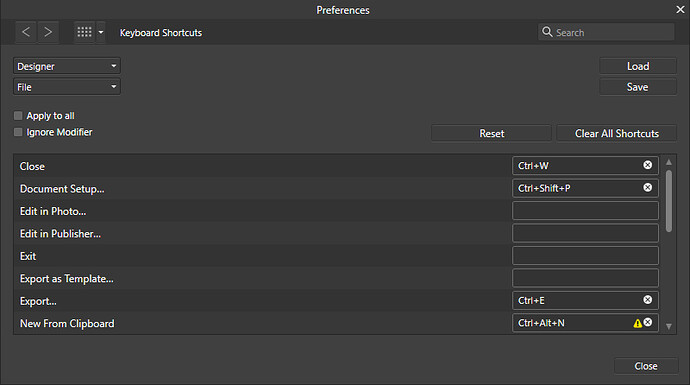 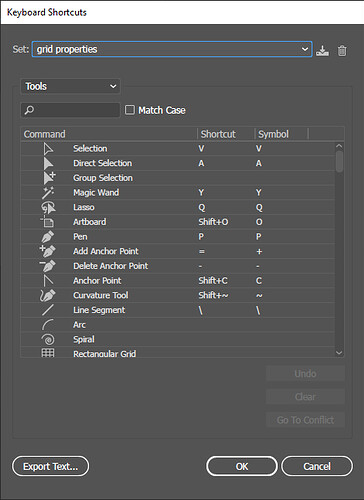 But we can even do it better in Figma.
Thank you

They are customizable to some extent if you’re using Mac.
If you’re on Windows you’ll have to use third-party apps. 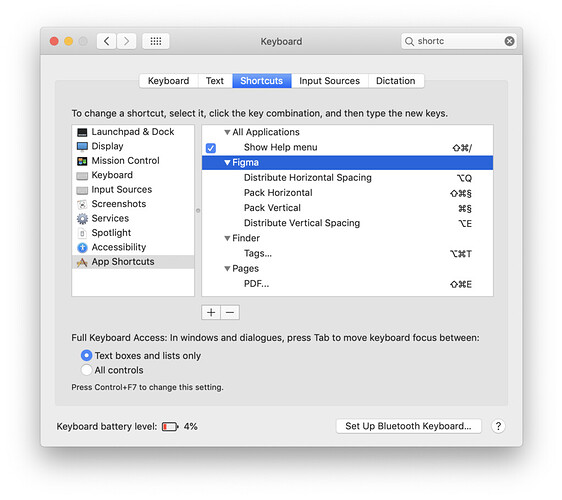 I am using Windows, it would be even better if we can customize it natively on the browser as well.

But thank you so much @Alex

They are customisable on Mac but not all shortcuts work. E.g. you can’t CMD + 1 for “Zoom to Fit”. Instead it switches to the first Figma tab. You can’t override it.

My #1 gripe with Figma is that shortcuts are not customizable.

Figma is a pro-tool meaning it’s used professionally and there is a focus on improving workflow. Shortcut customization is an essential tool for someone who tries to improve their experience. And most pro-tools allow this, even if it’s just via the Mac keyboard settings accessing menu items.

But even beyond that, you have to consider, that the shortcuts are optimized for QUERTY.
Since I’m on a German Layout I can’t even use many of the shortcuts.
cmd+[, cmd+ ] or cmd+/ for example are not available because these brackets are only accessible via modifier keys.

Vote if you agree about the importance of customizable shortcuts

@Josh @admins Is there an update on when we’ll be able to customize keyboard shortcuts?

@Chris3 we’re not able to share any specifics related to our roadmap/timelines. With that being said, I know this is something the team has been exploring.

These cheat-sheets are still helpful for people with non-US keyboards:

Here’s my 2 cents (over and over again) regarding WIN key mappings:

The keys are NOT just tied to a location on the keyboard, but specific hardware keycodes. Once you figure it out (it’s a little tedious, but possible) the least Figma could do is to show the non-US shortcuts in the onscreen UI Helper. Simply copy the cheat-sheets I built almost 2 years ago.

Non-US users will at least have some sort of guidance through shortcut jungle mess. I call this a low-hanging fruit for Figmas product team but they don’t seem to care

Customizing shortcuts is a great feature but mostly for hardcore users. I would like more people to start using Figma and not being overwhelmed or confused by completely wrong shortcuts. So instead of telling them “you can customize everything” give them proper guidance.

Rant: Not caring about different keyboard layouts is a clear oversight on accessibility and global market. We’re not talking <1%. This affects every non-US customers daily Figma workflow and I do not understand how no-one in the team is embarrassed by this long known (and partially solved) issue.

How is this not a standard thing yet? As someone coming from Sketch I am thrilled to start exploring Figma. The first thing I do after getting to know the tool a bit is to change the shortcuts to how I am used to them, given they have the same functionality as in previous tools I’ve been using.

I am on Mac yet more than half of my shortcuts are not working. I don’t really understand how this is the case because Sketch uses the same system preferences dialogue to let you setup custom shortcuts but there it is working fine for almost all keys.

To add to this in a more appealing way to product designers:
Reasons to implement this feature:

I haven’t been able to apply the Mac OS shortcuts to the Figma app, maybe I don’t know how to correctly define them, but even when naming it exactly as they appear, shortcuts won’t work.

Some really don’t make sense, design shortcuts IMO are made for your left hand, to never have to let got of your mouse or tablet, but things like moving between prototype and design are option+8 or 9 which forces you to use both hands, or the worst offender, select parent, which is shift+enter (for real?), even when you don’t use the standard esc, I guess for browsers it creates some issues.

Please give us a menu to customize our shortcuts, and like another user points out it makes transitioning much easier, I’d even go as far as having some shortcut presets from other apps so transitioning is as smooth as butter.

Agreed! With the new Quick Actions feature it would be so nice to remap it to something else. A lot of apps have started implementing this type of Quick Action feature, so I always try to map it to CMD+K if possible as I’ve gotten used to that shortcut for this type of feature from Slack.

Since the most recent update, this is becoming even more annoying. I used to be able to search for plugins with my keyboard. Now, this is not possible anymore cause the shortcut seems to have changed and is not accessible on a QWERTZ keyboard.

Windows users can use the new PowerToys as a workaround. Here is a sample customization where I’ve successfully mapped Layout Grids to Ctrl+’:

This approach is limited, however, and may be a bit overwhelming to some users. PowerToys is still in preview mode, you have to download it from Github, and didn’t have an installer last time I checked. As an application designed for professionals, Figma does need a complete implementation of customizable shortcuts.

I’m having a hard time switching from Sketch because of the lack of or strange double hand nature of the default keyboard shortcuts and it’s slowing me down tremendously.

I want to switch, but it’s very frustrating and feels like I’m ‘amputated’ not being able to access everything quickly using my keyboard. Making it difficult to justify the extra time spent using Figma.

If Figma would work natively with any customization in macOS System Preferences it would be solved.

Why are any keyboard shortcut customizations from System Preferences not effective in Figma?

I use a Portuguese keyboard and I’m unable to use the “Zoom to selection” shortcut. I miss it the most.

Figma shortcuts is the main reason why I don’t use Figma. By the way, I’m on mac with a French keyboard and for example I don’t know how to send a item back or move aan item forward. the shortcuts to manipulates items in z axis are already taken by macOS native shortcuts.

Yes. When migrating from Sketch to Figma, my speed was decreased and I had to re-learn all the shortcuts - some are just awkward where I have to let go of the mouse and use the right side of the keyboard. Ex. Remove fill, or Remove stroke. that uses “/” and “option+/”. I’m right-handed and using those shortcuts is awkward. I wish the keyboard shortcut was customizable!