I have an interactive toggle component that I would like to naturally change state on click and at the same time open a success toast overlay.

Currently, it doesn’t seem to be possible, the overlay taking precedence over the component’s interaction.

This is a very common interaction and it’s blocking me from creating a very simple prototype.

I would love to see that supported.

Hi @Valtrip, I created a similar action some time ago, which you can see in this prototype:

And you can see some details here: Is there a way to add multiple interactions of the same type? - #2 by tank666.

What I’m trying to achieve is to trigger both actions simultaneously rather than consequently like in your example.

So when the toggle is clicked, I want it to:

I couldn’t find a way to achieve it.

I also this, but take your time. You’re doing great!

I also need this feature in order to make a button change state on tap, and also open an overlay.

My guess as to why this is not available yet is to avoid conflicts such as on tap navigate to more than one frame, etc. But it could be solved by just disabling the ability to duplicate the same type of action instead of the interaction type itself.

As many mentioned before - this enables scrolling function to work properly with menu items. In my case, there’s an interaction for the variant and then scroll on an actual page. Should be totally possible in two instances 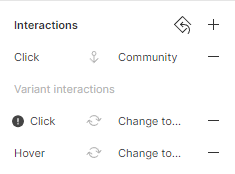 Couldnt agree more. This is desperately needed
It would even be greater if you could allow a trigger on one component to set an action on another component.
Most simple example - clicking on different tabs would switch between multiple variants of a sperate panel

It looks like we are plenty of designers with the same problem… we need it desperately! Figma is awesome and continuous improvement makes it even greater.

Really struggling to see how this wasn’t a core consideration of the triggers. I’m sure there are edge cases, but nothing is really explained about what complexity would be caused by adding more of these interactions.

If I have hover, active and focus states for say, a button component, the active state that was one available for click state is effectively hijacked for triggering an on click event to open something else like a toast or a message.

We’re being asked to choose between getting something to work and communicating a crucial part of a design state.

Axure is very good at this, and I would miss this feature if I am going to start to use Figma for prototyping.

Axure has no limit on the amount of interactions from a single click. It makes things so much easier to prototype, even something as simple as hiding a dropdown menu item and displaying a modal with the same click.

It also supports other actions, such as on move – which can be used as a listener.

I would love to see something similar in Figma.

This feature is badly needed. My team works with a Design System library with components that have built-in interactions (like a checkbox that changes state when clicked).

I recently needed to prototype a scenario when a checkbox is clicked and a button becomes active. I ended up having to create multiple screens and faking the interaction by creating an empty box that would allow me to change screens. It felt very dumb to lose the main feature of a variable component to add an interaction.

So true. Please implement as soon as possible. Even with simple actions like: on hover changing colors + click to navigate. This would improve greatly the feedback when prototyping as well.

Not only this but to be able to turn components into objects so that:
When I compose an interaction, I can trigger a swap of the object or objects’ state to completed/or not completed for example. Please, por favor?

Absolutely needed! Would be great to open an overlay while displaying another with one click - e.g. click on dropdown menu item and show the dialog but also close the dropdown menu when clicked.

Is there any roadmap for this feature? I would love to know if it is being considered, and if so for when? This would make life so much better for me using Figma.