(Issue) Keep the scaling of a nested component when swapping it

Yeah, I use a plug-in called “scale”. It’s so basic I wonder why it’s not a native feature.

+1. We want this. IMO feels like a buggy implementation of “scaling” 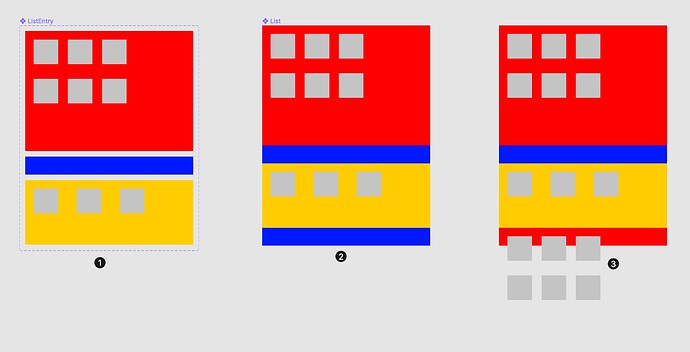 There are so many plugins called scale, skale oder scale whatever, can you let us know which one it is? <3

So you can scale at least something in height or width or in percent. but it does not what I want. The idea is that after changing an asset the list entry gets the height of the new entry. actual the old entry pretends the height. so if I switch an entry it the list entry should change to the height the new entry actually has. And I dont want to change it manually as I have a huge bunch of lists where this should happen … but thanks anyways <3

yeah this is not something that a plug-in can solve I’m afraid. I noticed that this issue happens only with nested components, so if you find a way to avoid nesting comps the scaling should stay in place.

I’m having this issue as well, I was able to solve it in the case of simple paths like icons, by setting every layer to ‘Scale’. But it doesn’t work with text layers.

It automagically fixes itself as soon as you detach the component or simply select the layer in the main component (if it’s a Local Component), so it’s definitely a bug.

I’ve had some similar issues with swapping variants. I was able to resolve it by adding autolayout to all my variants. I don’t know why autolayout didn’t carry over when I made the components in the first place, but adding it back fixed it.

It’s not quite the same thing as what you’re talking about here, but I figure checking autolayout is worth a shot!

Same issue here, we (the entire design team) use a lot of components containing illustrations/icons from a separate library. With this ‘bug/issue’ we are forced to flatten all shapes (rounded corners), text, and outline all the strokes. Which is not really ideal if we want to edit the illustrations (or icons) later.

@Figma Can you please fix this?

How it should work;
If a nested component is scaled (not resized) in its parent component, the scale should be preserved when swapping the nested component. (including scale of rounded corners, line-weight and text size)

@Joris_Hoogendoorn Unfortunately it’s not a bug because their ‘scale’ tool isn’t really a scale tool. It’s not a scale property. It’s a normal resize tool that just uses ‘scale’ and a measurement key. I have a feature request for having scale as a property. This would solve all of thissss. I’d appreciate a vote! Scale as a property

You can switch between ‘scale’ and ‘resize’ with K key on your keyboard, right? So, it should be a real ‘scale’ tool, then… I guess.

The fact that scale (also stroke weight/thickness) is not preserved when swapping instances is a real pain… Every time when you want to change an icon, you would have to reconfigure the stroke property and tweak it one by one.

having a similar issue with my app store screenhots template, the scaled screen components are shown correctly inside the phone frames – that is until i restart figma and change the background component – boom all fonts get reset to 100% – the assets still scale correctly but the fonts go back to 100%

Is this ok? I seem to have found a solution

This may work for some people, but the downsize is you now have to support and maintain more icons (I think I counted 6) because of the size variants you created. What you have is more of a band-aid solution to the root issue.

Ideally, I (and other folks here) would like to be able to swap in a single icon instance and have that scale to whatever the width and height of the swap destination is. That means we set the constraints on just one icon component and never have to worry about it being consumed in an area smaller or larger than the icon component itself because it should scale automatically, including the strokes (If we desire)!

but the downsize is you now have to support and maintain more icons (I think I counted 6) because of the size variants you created.

The number of icons will remain the same. You just create a component that is responsible for the size.