In figma, it is currently not possible to persist certain compository styles without having to think of all the possible use cases before and putting them in there, or to provide a component just so that it can be used as a reference, a starting point. The reason for this is that once a layer is in a component, it cannot be replaced, removed, multiplied or reordered. This makes sense, but limits what a component can do.

Being able to reorder layers within a component (perhaps within certain restrictions, such as only within designated autolayout containers) would open up a host of useful possibilities.

I have this problem too, typically when icons do not fit a square. One trick I am making is to have several options embedded with auto layout frame. Then I can show/hide the one I need without creating a separate variant of the same component. But it is very tedious to maintain and easy to break. 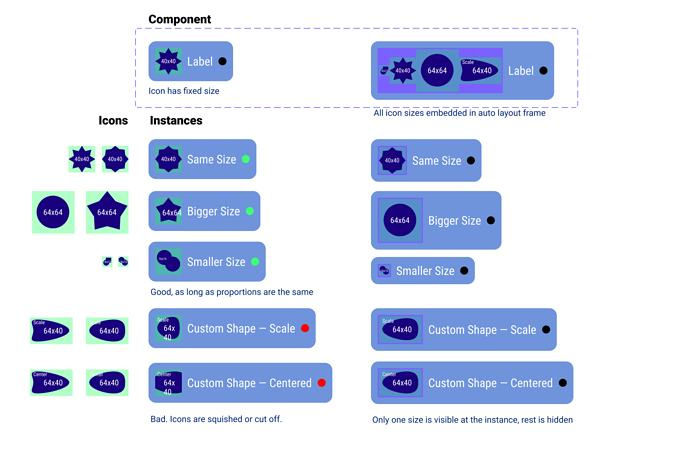 However I do not see how you propose these “define variable container” will work. The issue right now is that at some place there is an instance with fixed width and hight (and constraints). And it is logical that it preserves its fixed size up the hierarchy.

Hi @Constantine_Zuev! You can try to do it like in my example file:

Resizing an instance with variants Get Help

The answer above completely fixes the issue with resizing a variant in an instance. You can view and duplicate my file:

Or if you want, send a link to your file for me to see.

@tank666 thanks a lot for this tip! It seems like the core here is to wrap all icons in Auto Layout frame and set as variants. My only problem with your sample file: I cannot recreate it in Figma

Icon components don’t need to be combined into variants. You need to add Auto Layout to the component with “Hug content” settings, and set the icon layer (eg vector) to “Fixed width” and “Fixed height”.

To create a frame with zero height and/or width, just write .001 in the appropriate fields.

This idea is super powerful, and goes way beyond replacing and reordering single layers. If you can make an empty variable-content frame within a component, you can componentize container designs and page frames. Maybe this conversation, and the original statement above doesn’t quite advertise its strength enough! May need to make a new thread!

I really believe that if more people had some interest in this as well, it might have gotten more than just four upvotes. Unfortunately there doesn’t seem any interest in bringing Figma’s capacities closer to basal mechanics of the web, neither from the people using it, nor from the people developing it.

If I understand what you’re saying correctly, I think this will be really powerful for creating slide presentations with figma, where you have a set of basic slide components, but want to swap out images on a per-slide basis.

The lack of interest in this amazes me, and demonstrates why there’s such a gap in communication between designers and developers. Designers aren’t defining components in the same way they are built which in my opinion leads to extra time required liaising with the designer to determine intent, something I enjoy doing but that also could be avoided.

Figma kinda half allows what I need by allowing variable text properties for things like a title, but the lack of a general variable content container seems like a huge oversight. Take a tile component as an example; the properties of my tile include title, subtitle, background colour, padding, and then ‘content’. In the example of a dashboard I might use the tile to show some text, or a pie chart, or a todo list, or a calendar widget. The base ‘tile’ doesn’t change, it’s not a variant of tile if the content is a graph vs text. Variants of the tile might include light/dark, full-width / half-width, variations on properties of ‘tile’ not of the tile’s content.

This basic difference in conceptualisation between designers and devs is a huge pain point for me, and I’m very surprised it isn’t for others.

This is a frequent point of frustration for me. Working on a marketing site, I’m constantly having to detach instances to make simple one-off adjustments, like adding a disclaimer under a CTA button in a hero component. We should have an option to create component frames that can accept unlimited numbers of children, just treat them all the same (e.g., wrap them in 20px of padding and separate them with 20px gutters).