I am having an issue while exporting comps in Figma.
I am trying to export just one comp and Figma says “Downloading images 0/42” when actually there is not even one image and keeps saying that without exporting.
Screenshot attached.
I tried to install again the desktop app and also export the comp in the Figma browser and still the same issue.
Anyone knows how can I solve this issue please? I have to deliver so many comps and this is driving me crazy.

Thank you very much in advance. 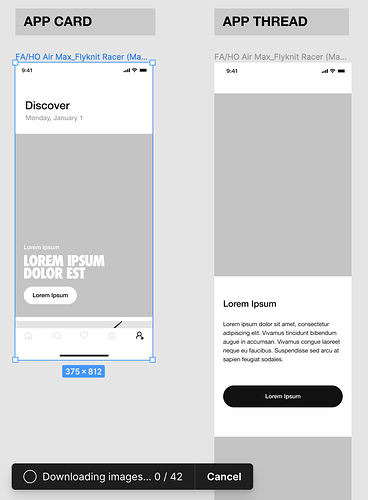 I’m experiencing exactly the same thing since yesterday evening. Seems like a Figma bug but not sure where to report it. I’m a new user, so I thought I might be doing something wrong.

Same here. It’s been happening for a couple of months on and off. Super frustrating considering we pay for the service.

Thanks everyone for your answers. Not sure either where we can report this issue to Figma developers. It keeps happening on and off. Copying and pasting is a good temporary solution for a single image but it can be really frustrating when you need to export hundreds of assets.

The same problem with me, I tried to “copy as png” to export the artboard but still got “downloading images”

same here! this has never happened to me before… it’s pretty frustrating since it’s something we pay for. any luck anyone?

Same problem here - what is going on?

Strange!
I have the same issue. It takes a long time for exporting a tiny thumbnail 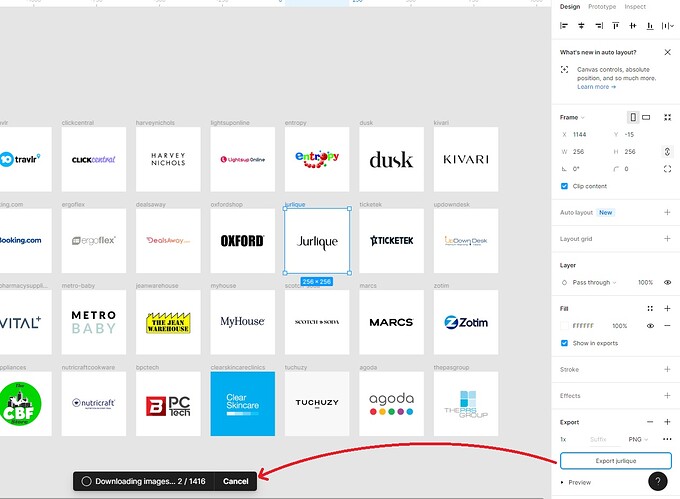 Having the same issue when trying to export an svg (though none of the image types work it seems) that’s just an 18px square icon.

copy and paste into a new file to export works, but that’s certainly not a real solution

Really we have to suffer for one of the most basic functions of any software - I can’t copy and do anything, this is beyond frustrating…when will this be fixed?

Having the same issue, unfortunately.

Same problem here. I need to restart Figma to solve this. After restarting and copying as PNG the “Downloading images” still show sup, but it actually progresses and finishes.

Restarting is never a real solution though, since it resets your undo stack.

I’ve been having this same issue as well. I find it’s on larger files, but none of them are anything extreme.

I love Figma, but I think I’m starting to see the limitations of a web based design tool.

This has cost me hours of work time over the past few weeks with no real solution in place.

It’d be great if someone from Figma would chime in.

Thanks for the reports and apologies for the issues you are experiencing. We are actively working on a fix for the issue where exporting shows a large image count and exports may be taking longer than expected. If you have specific files where the export does not complete and is reproducible, please reach out to Figma support and we can do further investigation as that is not expected.

I was having the same issue as everyone else. However, I found out that if I close the project and reopen it, I’m able to export everything without getting stuck.
From what I had researched on a different issue, Figma has a 2Gb RAM limitation, so it could be that RAM gets somewhat full causing the issue as all images would have to be moved to RAM to turn into the final image. But that’s just my speculation.
Now, I have no idea why it only allows 2Gb of RAM (at least at the time I researched that). I have 80Gb RAM on my PC and have problems opening extremely heavy projects on it. Meanwhile, my Mac has about 16Gb RAM and can open the same projects my PC struggle with without an issue. I believe that it’s due to how Macs manage RAM resources which is more efficient than Windows. But again, just a speculation that people can try themselves.