When exporting variant names, the file name becomes a combination of all the variant properties.

There is no way to control the variant export name, which is especially difficult for developer hand-off.

In this example, I have a back icon variant group (Named “Back”) containing both an Apple and an Android variant of the back icon.

If I then go to export the Apple variant as an SVG, 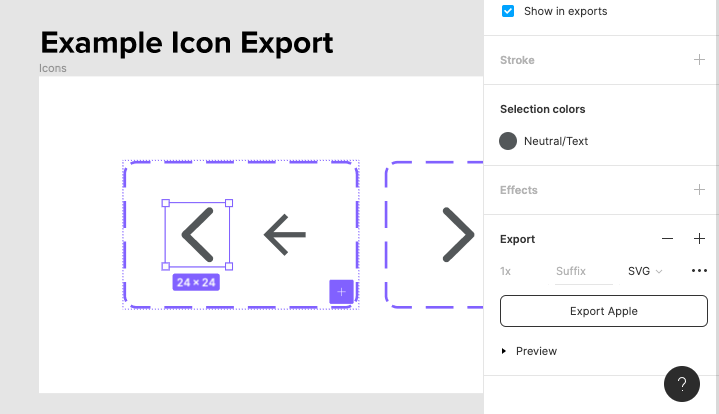 The variant export name then defaults to “OS Type=Apple.svg”

It would be even worse if I had multiple properties. For example, having two more properties could result in a variant name export as “OS Type=Apple, Direction=Left, Style=Line.svg”

This is a very poor naming convention, especially for icons. What I would like to have is the ability to control the name given to each variant export.

In the above example, I would like the Apple icon to export as the name “back.ios.svg” and the Android icon to export as “back.android.svg”. This way, our developers can export assets as needed directly from Figma without having to figure out what name to give each icon — further bringing together the designer/developer handoff.

Anyone else having this problem or have found a workaround?

There has to be a better way.

Has anyone else cup up with a workaround for this?

to hear from a Figma support dev!

Definitely a workaround, but I create an “export sheet” beside the component sheet. It has an instance of every asset variant I want exported on it, named as I want the export to be named. One pro of this approach is I often create two copies with different names (or folder path) and different export settings. So you get a folder of svg’s and a folder of png’s, for example.

Don’t get why this issue hasn’t gotten more votes!
Variants are awesome. But trying to mass-export them is another issue.
Right now, Figma doesn’t let you export variant assets with structural naming, which is a huge problem for our dev team right now. :’(
Hope this reddit thread helps you get a workaround.

Figma team, please have a look into this issue.

Yep, big issue for us as well. It would already help if the main component (variant parent) name would be added

Agreed. I really love the component variant system for working within Figma, and it would be great if I could configure exports to use the component, property, and variant names I’ve entered in a configurable syntax when exporting so that info is useful outside of Figma as well.

At lest include the component name (treating path elements as sub-folders) in the output file name for each variant. Otherwise, two components might very well have identical properties and values, and those would clash on export.

This is a huge issue for icon exports.
Please let us configure the export naming somehow.

If the component is named ‘menu’ and the variant is Size=16, i would like some way to export ‘menu-16.svg’ for example.

I’ve been using this plugin called Export Variants ( Figma - Export Variants | Easily export your variants to SVG. Figma variants are neat however they can be frustrating to ... ). It does a lot of what you are asking for here.

I still believe this should be handled natively by Figma, but it has been a good substitute for me at least

This plugin is a major progress in this regard, but we can’t customize file names or choose to export in a different file format.

Any update about this?

More of a workaround:

On Mac you can use batch Rename to fix the names. Select all files then right click and pick Rename… 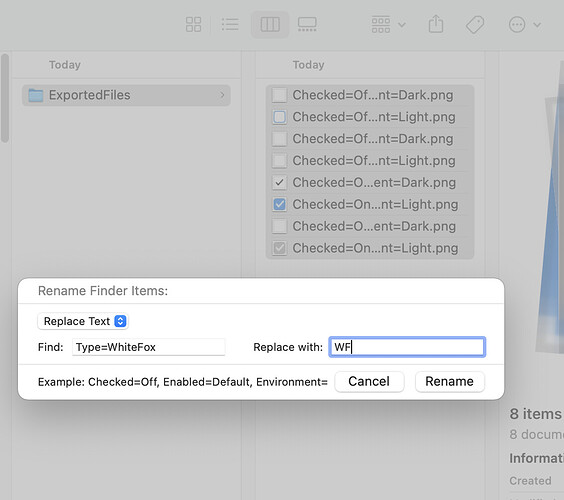 Pretty cool workaround! I I made some changes by rename first property same as variant name. This has the advantage of avoiding conflicts with other assets prefixes when first property is the same.

Hello guys. Any update on this?

I tried the two Figma plugins available (“Export Variants” and “Frame Exporter”). They do actually work but they apply only one resolution/format export mode at time. SO you are forced to do multiple export passes for each resolution and file format (I usually need to export 1x, 2x, 3x PNG + SVG) and adding custom suffix information. Totally unfeaseable for day to day jobs.

You got some news or update on this?

Just here to say how painful this STILL is, even after Config updates.

Having the same issue and our developers are struggling with this a lot. Hope to see a solution soon.

Same issues with our devs, Figma please fix this.

same here. why should I use figma if I have to rename all the resource files every time?