I have been designing for set-top boxes for several years now. And it is very convenient to do it through the transmission of the screen to the TV.

But, there is no official support for Figma Mirror for TV sets. Many times I wrote to support and asked, but I always got the answer that there is no support.

The most interesting thing is that Figma Mirror works perfectly on Nvidia Shield or Google Chrome (last generation) set-top boxes.
You only need to put the app through aptoide. But with each time figma mirror refines the functionality for the phone, which severely degrades the functionality in TVs. For example, last year, after another update, the Remote Control for prototyping stopped working on the TV. It was very convenient to make a prototype, connect the buttons on the remote, and control the app. It felt like you were really using an out-of-the-box app. But it doesn’t work anymore.
The second example happened with the last update. There was onboarding, which doesn’t allow you to properly authorize through the TV. It took me 4 hours to find a solution and authorize through the set-top box again. And everything works again. But I spent a lot of time on it.

And now the question.
Am I the only one who needs Figma Mirror for TV? I understand that not all set-top boxes will work well (on the MI BOX works poorly), but there are powerful set-top boxes where everything works fine and fast.

Why not at least make a beta version for TV, with minimal mirroring functionality? Especially since it works.

Dear Figma. We love you very much and are waiting at least for a simple mirroring for Android TV. It would help a lot of people to make cool interfaces for TVs. 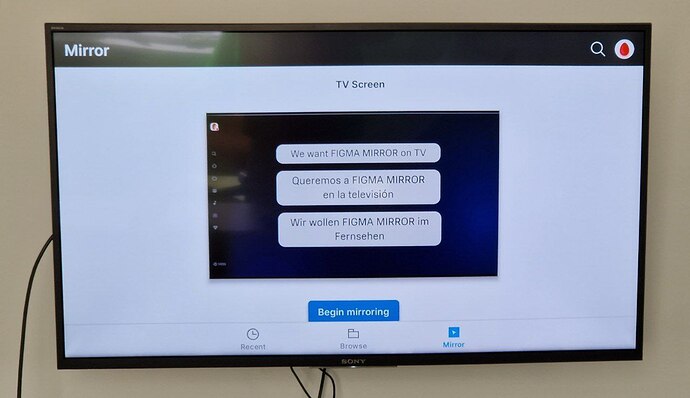 I am hitting the +1 button with a hammer. Still only adding 1 like. Damnit.

Please, this, soon. I’m working on a TON of TV / large screen interactive interfaces over the coming year(s) and can’t stand the mirroring nonsense I have to go through with AppleTVs now. A very simple mirroring app as suggested here would be fantastic.