Hey. Today I was working on my projects, and as soon as I closed the Figma app in my Windows machine, when I reopened it started crashing when opening any project file.
I’m able to enter the main screen, but not projects.

I reinstalled the program, deleted the /Roaming/ and /Local/ folders… Nothing works… What can I do?
Thanks

It is happening with me too, I tried everything, but it keeps crashing…

Having the same problem shows Figma agent has stopped working

Also from today Figma Agent crashes when opening Figma in Chrome or Firefox.

I found out that Figma now requires windows 8 or later. where my pc is windows 7. Is it the main issue for not opening the desktop app?

i got same problem. Here what i do to fix this: Figma crushing and it's solution for it
Works on my windows 7 machine

Same. The desktop version does not work

same problem, something is wrong with the updates. I also want to find a solution to this problem

Im not sure if it’s just a bug on Windows 7 but my thoughts for this is that Figma team dropped support for Windows 7 (On W10 works fine). As the program is a web based tool, I don’t think there is a workaround for this…

I hope I’m wrong and maybe is just a bug on this OS versions and can get fixed soon.

The workaround that @Archie_Shell-Shocked found is working

This is what to do: 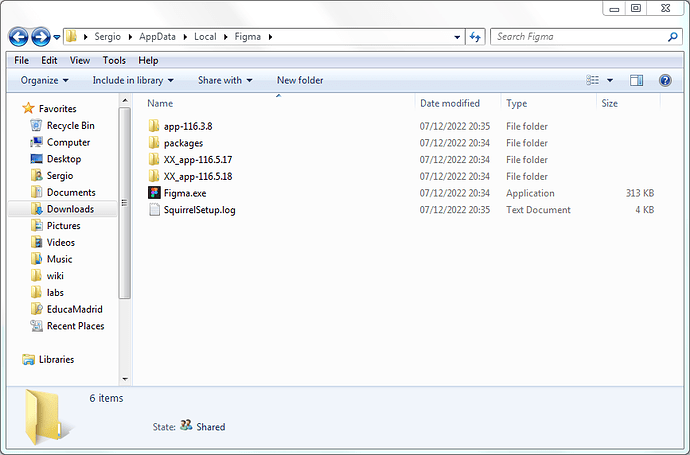 I can confirm this is working. Thanks

Guys this work just for one time, after next start app not work again

It does work, just make sure to remove full control permissions for the folders, so Figma can’t replace files

Personally, I would like to get a response back about this recent change from the Figma team; has Windows 7 support been discontinued? (In the Figma Browser Requirements it says Windows 8.1 is required, but this warning was there from May 2020, and Windows 7 has been working until this month)… Is it a production error?

Hey, i just upload another file. Now tabs is working for me. Can you reinstall it and check if its working?

Thank you so much!!!