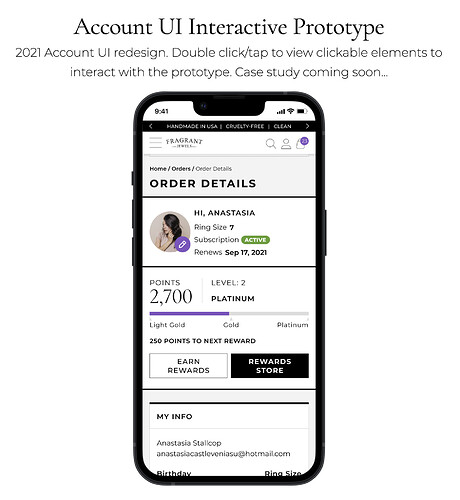 But when it comes to safari - no matter what size I adjust something gets caught off or blown out of proportion. It works in terms of - you can actually interact with the part that are visible but it’s not rendering correctly in terms of scale. Can anyone help me?

I’m having the same issue on Safari and Chrome Mobile. Also just a heads up that in reviewing the issue, I checked out your prototype in the latest version of Chrome on my iPhone and it is not appearing within the phone frame used in your prototype.

If anyone has a solution, it would be greatly appreciated.

I am also having issues: embed prototype not loading at all on mobile! By the way I checked your Flagrant Jewels page @Stazzyboo and yours is not loading either.

I reported to Figma as a bug, they are trying to resolve it but still no success. It’s seem exclusive to mac/iphone safari for me but loads on chrome browser on iphone. I literally detached all instances and removes hidden layers and got my file size to tiny and that did not help. Figma agrees it’s a bug and they are working on it. Might be worth reporting to them so they put a pedal to the metal

Literally the next day it stopped loading. Literally that morning I solved the sizing redndering display issue with a hack and then an hour later it stopped loading all together. I reverted code, reduces file size, etc and nothing helped! It did load on chrome on iphone but not safari. I reported to figma and they said their engineering team is working on resolving.

Same thing is happening to me. It was loading but literally the next day when I solved my display size issue it stopped loading at all; reverting code, reducing file size, etc - nothing helped. I reported to Figma and they said engineering is working on it. I would report yours so they realize this is a widespread issue! I know for a fact it WAS working, so something happened on their end that broke it. I literally spend almost 48hrs getting to display how I want it to and resolve all the issues only for it to stop loading - upset me cause now potential employers can’t see on mobile device

Update: checked chrome and now not appearing on either safari or chrome