I would love to see a full flex-layout implementation, including the ability to set grow, shrink and flex-basis values.

+1 for this to be implemented

Adobe XD has something with a similar behaviour called Repeat Grid, which can be vertical and horizontal at the same time. If the Repeat Grid could be combined with Auto-Layout that would be amazing.

Repeat grid is a completely different behavior that what is specified here.

I believe that the official implementation of the UX of this plugin will solve everything. 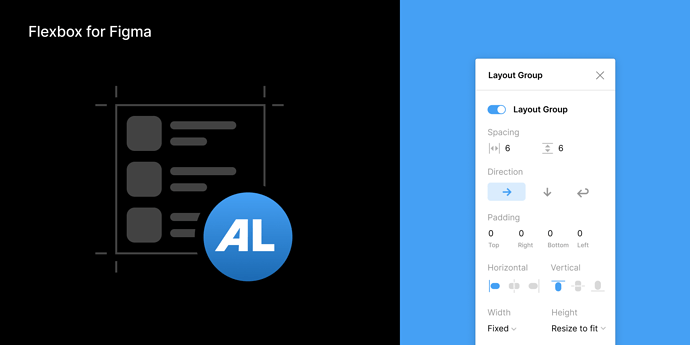 Figma - AutoLayout | AutoLayout dynamically lays out layers in frames and...

Figma Community plugin — AutoLayout dynamically lays out layers in frames and updates the layout when the dimensions of child layers change. It behaves similar to Framer Stacks and the Anima Toolkit for Sketch. Creating a simple list 1. Wrap the...

Reproducing it with a hack is not realistic because there is a risk that some update will disintegrate the figma files.
I don’t understand why they defined the master component as a variants element, not only for the way Autolayout is implemented, but also for the variants feature.
It is reasonable to define the instance as a variants element and configure it with overrides

Can confirm that this plugin works great!

This plugin is godlike. Exactly what I was looking for. Thanks for the tip.

I need to know how to achieve this

+1 this feature would be amazing

Looking for this functionality as well. Native wrapping elements in auto-layout.

It would also mimic flexbox much better which should be the goal imo.

I believe this is essential behaviour. We really do need this.

+1 This feature is sorely needed. Plugins help in some cases, but you can’t really rely on them when building a design system with components.

I think there would have to be two options for wrapping, one for columns and one for rows (like in css using flex-flow with column wrap and row wrap).

+1 for this feature. I hit this limitation all the time. The plugin mentioned above works well, but true flex-box functionality would be great. cheers!

+1 please we deserve this feature, none of your competitors do it either I think, it would be yet another reason to join your forces !