Interactive components not working when nested inside a main component

Nesting interactive components is still broken and mess up the prototype when used that way.

As I found, the only solution to get it working is to restrain from using by removing the interactions from the nested component and instead create additional variants for the parent component.

Depending on your number of nested components, their variants and resulting count of combinations, it is simply not reasonable to recreate them as single parent variants.

So currently, this takes away a big chunk of the Figma prototyping capabilities.

Oh, so I am not the only one and Figma keeps not debugging basic things : /
Just tried to put a checkbox within a list component… unfortunately, results in an error.
“Cannot read properties of null (‘fileUpdateRequired’)” - of course the design system file is updated and published and the design file is updated… OMFG…

I’m having the same issue.

I have a dropdown overlay which works on its own, but when nested into another component, fails to work. 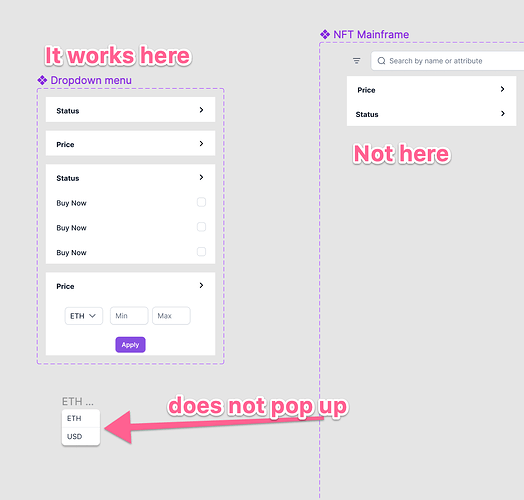 Actually I fixed the problem.
The issue is that I had the overlay on a literally separate page. So this meant that I could see the overlay in the dropdown menu on one figma page, but not when I used a component instance in another page.

This may be helpful to know, you guys should put some sort of warning somewhere, because I lost a few hours of my life trying to figure out wtf was going on

Users should know that this is an issue somehow within Figma, like a warning.

Hopefully this doesn’t happen to other users.