Interactive components not working when nested inside a main component

Still not working. @Jordan_Romanoff described it nicely — mouse enter / mouse leave / while hovering doesn’t work if nested inside another component.

This happened to me. The fix was to use the instance of the master that contains the nested interactive component.

Basically if this is done inside a master, and that master shows an interactive component’s instance, the instance refuses to react.

Not sure I do understand the fix. Can you elaborate more? Can you give an example?

@Marko_Kosovic I just went through something similar, I think I can help explain. 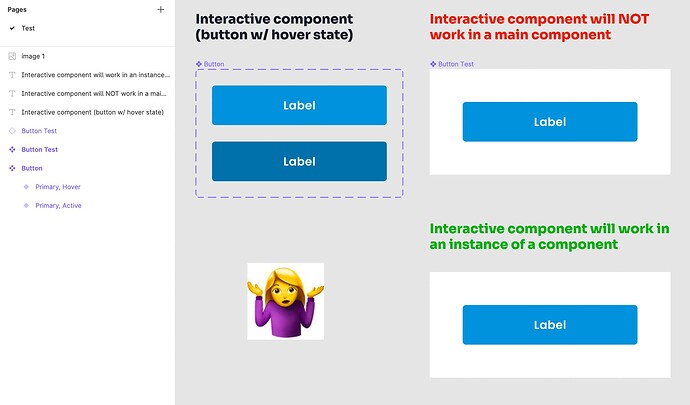 @Jayna_Moloney Thank you for clarifying. That goes without saying.
Playing prototypes doesn’t work without having regular frames, so you have to use instance any way.

But seems like it doesn’t work in some specific pages in the way you described either…
And I was experiencing the same issue with library import.

When I create a new file, it does work!
But as mentioned before by @Constantine_Zuev , it’s buggy and unpredictable.
Even if you turn on/off “Enable interactive components” some pages have the same bug.

I have come across a similar issue. I have made an interactive dropdown. It works fine when it’s not a component, but as soon as I make it in to a component, and then make an instance of that component, the interactive behaviour causes the Figma prototype to crash.

Try moving your components and screens to new page. This worked for me.

Exactly the answer I needed! Thanks, it worked!

Same issue for me, giving me “nested instance is swapped with its parent instance” error when playing the prototype, if they aren’t parent/child then prototyping between them specifically - change “on tap”/“on click” does work, but if they are connected it does not. I wish there was a fix for this. I don’t want to have to change every button variant individually, I like them linked so when I make mass changes it changes everywhere cause I auto-layout all of my designs. Frustrating. Moving to another page did not help.

nested instance is swapped with its parent instance

This is a separate issue, if you pasted it from another file, try checking if they have nested variants other then original. As described here:

Error for "Nested instance is swapped with parent instance" Questions

Hello, I’m trying to create an interactive component for checkboxes. In my design system file, I have wired up the checkbox variant already. Then I opened up a new file and dropped in this component. When I play my prototype, however, I get the following error message: “Couldn’t play interaction: nested instance is swapped with parent instance.” What does this mean? I’m not sure the component has a parent instance.

Parent component - the original component you made - the very first one, before you copied it and created a component out of that it (the child component).

When you inspect the layers you will see the single blue diamond outline icon inside a component (4 mini diamond in diamond shape) you made, meaning you did not detach the instance. The new component you made has the parent inside of it (since it’s copy of a parents that has been turned into component without detaching instance).

So what you want to do is keep the parent (the original component) on it’s own, do not combine it as a variant. Instead copy it as many versions as you need to make - make modifications and turn them each into a component and then combine “the child” components. You can not combine parent with child (parent inside child), so all variants need to be children, combine child (parent inside) with child (parents inside). Does that make sense? Take a look at the link in this file at the layers construction (one is the issue and the other is the solution): Figma

Thank you for this detailed reply!

Thanks, Kevin, this workaround works.

Hey @Anastasia_Stallcop, thanks for your comment. It looks like it is the right way to go. In my case, however, the combined components (variants) never worked on the page I have the components. What I had to do was to duplicate the design page where I had the issue and then it worked. I am happy I found a way to fix the issue but the fact that I dont understand why it doest not work really annoys me
.

It is been a while since i started this topic, and at this moment my workflow switched around this problem.

Main thing i understood is that there is no much reason to use main components in your production pages.

In my average wroflow. i created components nested with other components as needed, and then store them in pages following the Atomic Design theory.

It also helps into some popular interaction bugs, but that is for another topic.

But to put a solution on this topic: “For some reason, no, Interactive instances does not work inside a main component. They work when the main component is an instance as well. Try figuring out another workflow, that not requires main components to be inside production pages. (which in my oipinion is also a bit dangerous)”

This issue has not been solved. I created an auto layout that expands out. This works fine on its own and also when I turn it into a component. As soon as I create an instance of that component, the interaction of the expanding auto layout DOES NOT WORK. This bug has been around for a really long time apparently and it’s still not fixed??

this is really annoying. please fix. 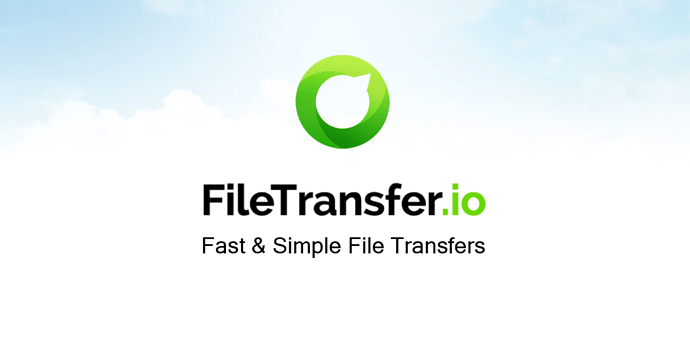 Size of the data package: 24.18 kB. Free transfer of up to 6 GB of photos, videos and documents. Send large files via email or a link to share. No registration, no ads, just simple file sharing!