How to fix "Corrupt layer names"

When trying to publish a library component, one component is listed in section “Invalid components” with error message “Corrupt layer names”. 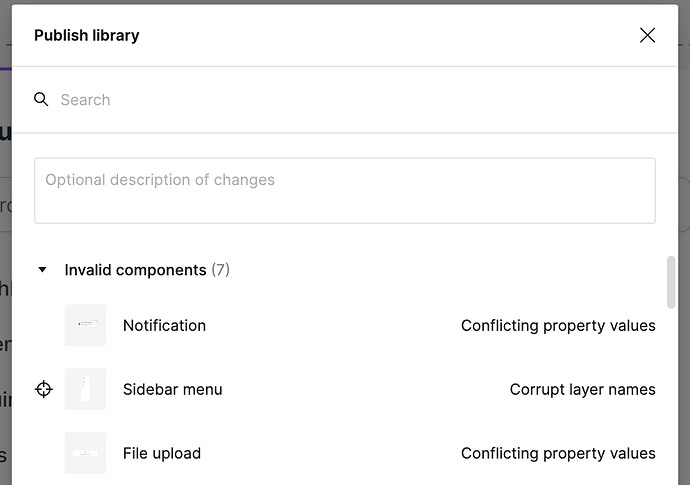 Looking at the component, I can not see anything special about the layer names (like empty names or special characters), that could invalid/corrupt.

Does anyone know what this means and how it can be fixed?
Thank you!

To fix this issue, you’ll need to rename the properties and values of the variant. While it’s possible to rename them using this syntax in the layer name, we recommend renaming properties and values in the right sidebar instead.
https://help.figma.com/hc/en-us/articles/360056440594-Create-and-use-variants#:~:text=Fix%20corrupted%20variant%20errors

Fix conflicted value errors
All variants within the component set will use the same properties and values, but each variant needs to be a unique combination of them.

If any variants have the exact same combination of values, Figma will let you know that there is a conflict. You’ll see this error even if the variants themselves are visually different.

To resolve this issue, you’ll need to add or update the values of the affected variants, so they have a unique combination of values.
https://help.figma.com/hc/en-us/articles/360056440594-Create-and-use-variants#:~:text=Fix%20conflicted%20value%20errors

Select the desired Component Set or a Variant within it. Look in the right panel for which properties/values ​​have conflicts and fix them by changing the property/value name.

@tank666 Thanks for pointing out those articles.
Actually I found them before, but they appeared to describe something else because the error messages “Corrupt layer names” is not mentioned at all. But now in retrospect this is the issue which I had:

It turned out the naming of the component itself was wrong, but Figma does not show the full component variant name on the left side.
So it should have been “User=Admin”, but it was only “Admin”. The displayed text is the same though, it’s always just “Admin” – this is what led me to assume the naming was correct.