This is available via the TinyImage or Pitchdeck Studio plugins.

@Edward_Flora Online tools only do so much, key issues with the large file size are due to

TinyImage is currently commercial, starting at $15 per month and going up from there. That might not be a viable option for a lot of people now.

It always was a paid plugin.

Acrobat online will compress your PDF for free.
Its also an Adobe site, so somewhat more trustworthy than some random site out there that does something similar.

(Can’t include a link, but…)
Search for: acrobat/online/compress-pdf.html

I would like to see a better implementation of Figma’s export to PDF feature. I know PDF is an Adobe format, but there is something about the way Figma exports pdfs that blows out file sizes excessively.

Designers commonly mock up print files such as resumes and brand guides in Figma, but sometimes people may want to export these files out to pdf to send to people by email. If you have many assets or images, the pdf Figma exports is excessively large.

For example, I exported a two page style guide the other day and it came out to 24MB!!! Even if I downsized the images, the images which were in a clip mask was saved out as a raster image, which is not ideal because PDF should ideally contain vectors. And even then it came out to 5mb.

I had to redesign the entire thing in InDesign where I could then save it out as an interactive PDF. The whole thing came out to 500kb…

PDF is an important file format (right now) and designers need it for a lot of use cases. But I do think the export to pdf feature could be drastically improved on Figma. I know it could be a monumental task given that the format is Adobe and Figma is primarily for digital design. But the PDF format is important too, and what is the point of having an export to pdf feature if the end result is completely unoptimised and unusable?

If those key issues were solved believe the size of the pdfs would be very similar to pdfs produced through adobe software such as indesign etc.

We are creating lots of printable documents in Figma and when I export them as PDFs their file size is huge compared to an SVG export.

The problem can be reproduced here: 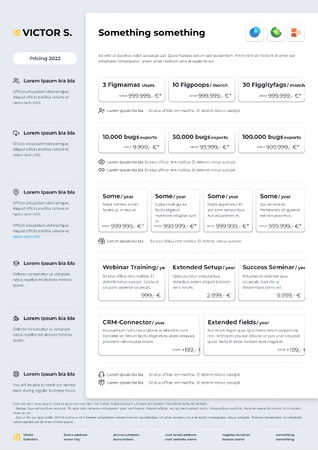 It would be really cool if we could have some sort of PDF options to include smallest possible filesize or allow text to outlines etc.

I believe this is a known issue. I usually export the PDF compress it using mac’s own preview app. It worked for me in the past

I’ve used Compress PDF online. Same PDF quality less file size for a while and will continue to use it for my infrequent PDF sharing needs. I thought that the TinyImage plugin would be a better solution but after the trial period, it doesn’t make financial sense for me to keep using it (for pdfs or even the other formats it exports smaller).

It would be best if Figma just had this built in, for every export format including PDF.

Why would anyone intentionally export files that are several times larger than what’s possible to output?

Any progress on this?

I agree - there should be settings within Figma to manage the size of the PDF export. Options mentioned in this thread are not great. This is the one downside I am seeing for Figma vs Sketch. I never had this issue in Sketch, even with massive files. Sending large PDF files to clients for review is not great since many email clients have max for file sizes. 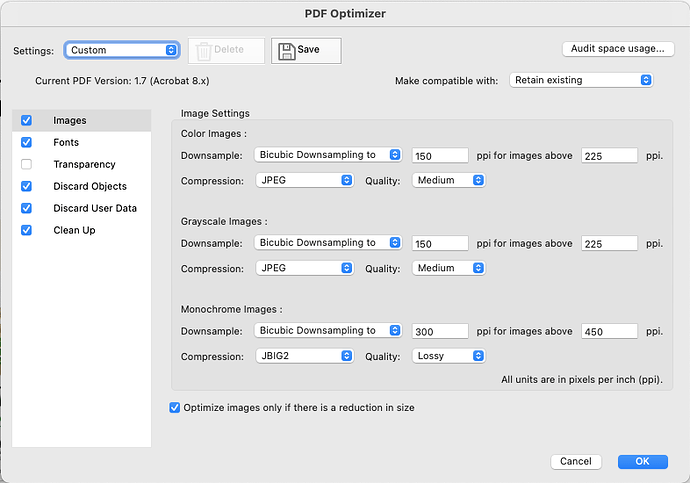 Hey guys, so I am creating PDF decks for briefs and if I export PDF via File > Export Frames as PDF then the 3 page deck with 5 photos is roughly 33MB. Sometimes these pdfs go like 150-300mbs. Could there be a setting like there is for jpg/png to control the level of compression/optimization. Adobe Acrobat has a tool and I just wonder can this be ported over? Maybe there is a plugin I am missing out on?

TinyImage-Compressor is a great tool but it’s prohibitively expensive for me ($12 per month!). I thought it was free but they charge you after 15 exports. Wish Figma had a baked-in solution to this mess.

Agreed — Figma is terrible at PDF exporting — and that is a big problem when generating decks for business and exec leadership.

There are hardly any features baked in — it’s not even possible to export only selected Frames, or export based on pasteboard order (top to bottom, left to right) — and on top of that the exports are MASSIVE — even when therer is only a few bitmaps (screenshots) with the rest as vectors. If you work in a large org, you essentially need to export and share decks via PDF, and they have to fit into an email. This is a massive problem I’ve encountered. A 33 page deck is 144mb exported from Figma, and worst of all the export is done in a weird and non-optimal way that even Acrobat can’t fix. A similar deck exported from Sketch would optimize down to about 4mb.

This kind of thing is so foundational to the design process… and not every org is setup for click though prototypes and live comments. Some things need to be documented into PDFs as part of the approval process.

I really would love some way to compress PDFs in figma like others have said as well. Not only would it help with stakeholders reviewing, but also for any PDFs that have to be uploaded into a submission platform like Veeva. We almost missed a submission because even with using some compression software (tried adobe’s PDF compressor and small PDF) it wouldn’t upload into the submission platform. When using sketch for the same exact project we never almost missed a submission due to this because the PDF came out small enough and could compress even further without it looking bad. We ended up having to submit something that was pretty pixelated so that it would upload.