I really wish this did the trick! The problem persists for me.

The problem is that a child instance of a component won’t scroll properly when it’s used in a different Figma file.

Double check my work: Make a component with a fixed header and/or footer and some non-fixed interior content. Enable vertical scrolling on that component. Take an instance of that component into a new file that is linked to the library file where you made the original component. You’ll see that when you try to interact with that component the fixed position is not functioning.

I was having issues with that too.
The solution I found was to adjust the component to the place I wanted it to be fixed.
In my case it was at the bottom of the page. So I set the ‘Constraints and resizing’ and it started to show up in the prototype.

I am also having this exact issue. I also have tried the advice suggested by the others and still cannot solve the problem. Have you made any progress since your latest post?

Also having this issue. It does make the components almost unworkable for my needs.

I am having the same issue and have tried everything mentioned above. I have played with components, tried to use additional components. None of it works. I am trying to make a FAB with hover effect but the button disappears once I check the Fix position when scrolling option. Figma, do something with it!

Wrap your instance in a frame and set the desired constraints and “Fix position when scrolling” for this frame.

3 Likes
Pin a navigation component to the bottom of any device size? Is it possible?
Interactive variants that fixed on the page. Animation bug
Bottom menu Jump up
Fix position when scrolling glitching on prototype
Interactive Components Jumping & Flashing When 'Fix Position When Scrolling' is Selected
Fixed when scrolling animation bug
Anna_Nojek July 8, 2021, 2:15pm #17

Already done it… The main component is wrapped in a frame, I have tried to set the fix position when scrolling for it as a major trait, then I tried if it works with its instance on a screen where the button is placed, when it did not work I have set the option with fixing for the button (instance) on the screen… Vertical constraint. None of it works.

Duplicate this file and try to do the same in your file.

This doesn’t solve the core issue, at least for me. The component needs to be part of an asset library to reproduce the issue.

I found out the problem while sleeping. Literally. The button was placed on the bottom of a page, which was longer than a screen. When I placed it in a screen light, the button is visible…

Thank you so much!

I had a similar issue. Not with a component, but just with a basic frame. It looks like the “Fix position when scrolling” checkbox doesn’t appear if the parent frame has an Auto layout on it? Would love confirmation from someone from Figma.

Hi @Tamara_Didenko, could you show the layers panel and indicate which layer you select?

Oh my god. I spent hours trying to figure this out for my anchor navigation component.

Scroll to doesn’t work with components (except the master component) at all, and additionally if you are trying to smart animate it doesn’t work both ways. [The first way works as it’s the master, but not the reverse e.g. a drop down list demo will open but not shut]

My hack fix was to detach the anchor link nav instance on the second page and in another more complex component just overlaid a transparent button.

I really hope this gets fixed because both those solutions are temporary and i can’t have multiple pages of detached components.

@tank666 I’m having the same issue. I’m trying to make the heading fixed yet I can’t figure out how to do it when the parent frame / component has auto layout. Here’s an example file and screenshot of the selected layer (below). Any input would be appreciated. 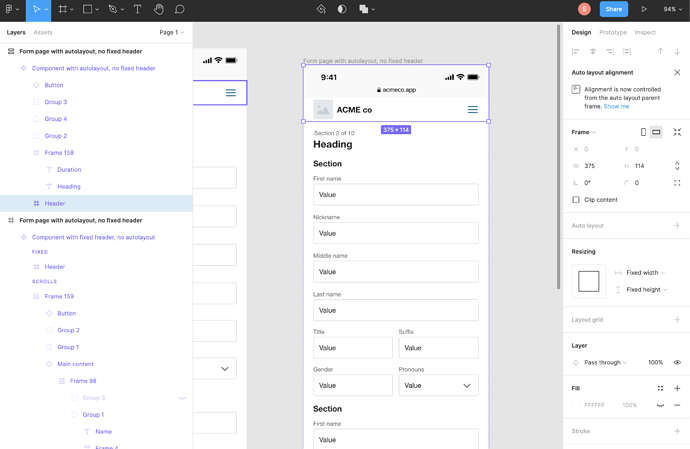 THANK YOU, this one works for me!

Double check your constraints are set to the bottom. It fixed it for me. 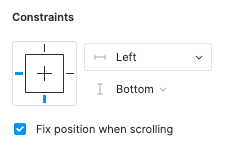 You’re my hero - thank you!

@Mel5 Your fix worked! Thank you so much!

Detaching Instance from the parent component worked for me.