Change To option not working

Hi guys. I have been using Figma for a while now and I just noticed the “Change To” option when prototyping. When I saw it I wanted to use it but it seems to be greyed out and I can’t click it. I searched on YouTube and here but didn’t find anything helpful. I even tried Figma Beta but still nothing. Any suggestions?

Change to interactions can only be created between variants in the same component set.

Change to is causing some trouble for me now. I have a component for a section of my page made up of various other components (including an instance of a lock icon). I have 3 variants of this page section component and I want to be able to swap between them when I click on the lock icon. 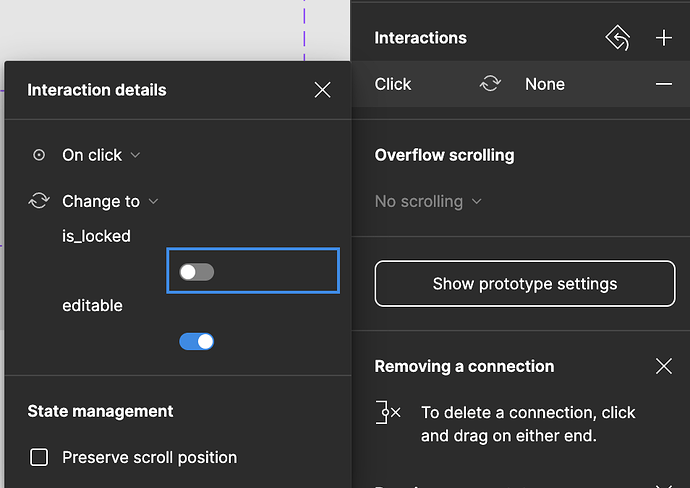 As you can see the change_to option is available to me, but for some reason I’m just not able to toggle any of the properties to actually get it to change.

I’ve tried changing the interaction type to hover, etc. and the behaviour persists
I’ve also tried changing the values of the properties so that I get a dropdown instead of a toggle but although I can open the dropdown and select the value I want, it does not register my selection.
Using Figma in Chrome Version 107.0.5304.110 (Official Build) (arm64)
Have tried using Safari as well (logging in for the first time using Safari) but it’s the same issue.

I was able to get it working, but for some reason I had to add the interaction on Icon SVG layer itself rather than the instance of the icon component (see highlighted layer)