I’m not sure if this is a bug, but here’s my experience:

The problem is this: There is a thin white bar at the top, which pushes my prototype down 20 pixels. It’s all white except the battery indicator appears to be showing on the far right. 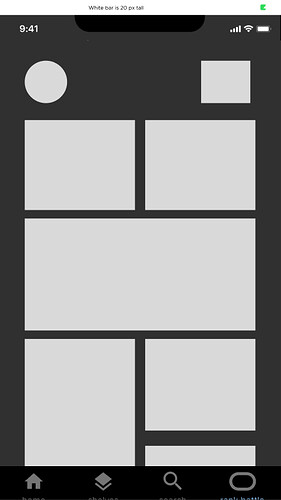 Obviously this is problematic because I cannot experience and demo the prototype on my iPhone properly, as the bottom navigation is cut off. I need a full screen prototype experience.

Anyone have any idea what I can do at this point?

Could you demo with the Figma app instead of using a Safari home page link?

Nope - I need to demo it on a real phone

If using the iOS app is also not possible (e.g. you need to launch from a real home screen vs. a mocked up one) then unfortunately I am not aware of any easy workarounds. (There is a very hard workaround that involves you embedding the prototype in your own web site, and coding the page like a PWA to manage status bar visibility … but this is way more work vs. the Figma app.)

Unfortunately the Figma iOS app doesn’t work on my demo iPhone (says I have to update to the latest iOS version, which I’m very hesitant to do as it may render the phone unusable).

I’m going to get rid of the status bar in my design and see if that works.

I have the same issue/question. And yes, if you open the prototype in the official Figma mobile app, it behaves as expected (like, in a ‘native-app-way’). The problem is that I need to send the prototype to people that does not want to download a specific app nor create an account and then be added to my company’s Figma account (which they have to if they should be able to view the prototype inside the Figma app). It would definitely be so much easier to send the stakeholders a link, and then talk them through how to add the safari bookmark to their own phone’s Home Screen (without this pesky white bar that is pushing the content down on the screen).

Adding my own visualisation of the same problem the OP wrote. 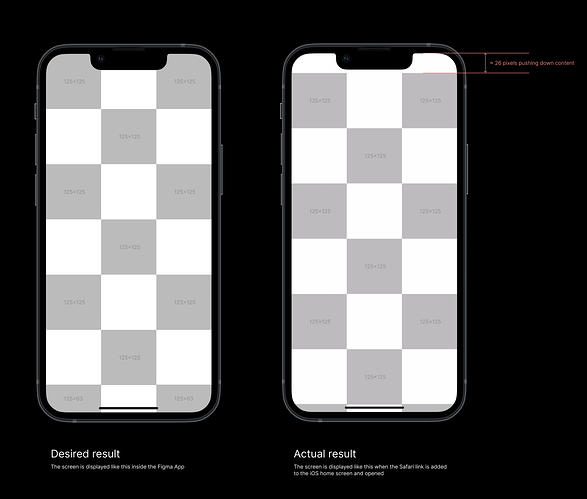