I’m having an issue with interactive components.

I am trying to create a flow in which when opening a slide-up and making a selection switches to another variant of that component, and then clicking on a button from the second variant would navigate to a specific frame.

The slide-up is a component from a library file and has two variants, one where no selection has been made, and one where an item is selected. As mentioned above, I want to set it up so that the navigation to that specific frame occurs when clicking on the button in the second variant.

The slide-up instance in the file is in its default state, and it switches to the selected state when interacted with in the prototype.
The interaction is set up, but it does not work and closes the modal instead of navigating to the designated frame.
However, when I set the component instance in the file to the second variant, it works as intended, but in this case, the wrong variant is opened by default.
Is there a solution to this?

I set up an example file to showcase the interaction, it can be accessed here: 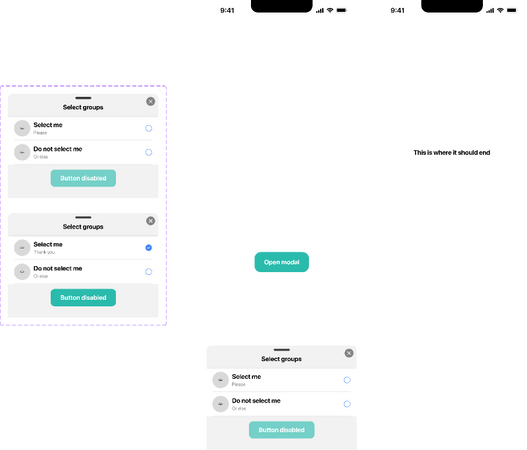 There is a workaround. In the main component, add a hotspot layer (in one variant it is hidden, in the other it is shown). Then add interaction from this hotspot.

Thank you, I will be giving it a try.
My current workaround was to use “Swap overlay” with Dissolve to the variant in the second state.