Problem:
I have a input component with changeable text, this is nested in a component that has it’s own labels around it. When switching between variants of this top-level component, the label text is transferred but the nested inputs’ text is reset.

Solution:
Being able to pass through the input components text property to the parent component would fix this and make it easier to edit the component. Any properties could do this, surfacing instance selection, visibility - I dont think it should be automatic though, there may be options irrelevant to the component it’s being used in.

Being able to pass through the input components text property to the parent component would fix this and make it easier to edit the component.

+1. Our design system is also running into this issue. We use a couple of sub-libraries that rely on master library components. We would really like nested, or child, component properties to be passed to the parent.

We really want to lean into properties and remove the amount of variants we current have for simple boolean action.

Any help would be appreciated!

Same here, for now I’m literally duplicating same exact component base so that I can expose that without having the designers drill in to make changes.

Also, it would be nice if we can choose which ones to expose.

I’m creating highly modular components and this would really help!

Would love to see this as well

Yes please! This would help so much with designing modular component systems in Figma and in React.

Just as in code one could instantiate a parent component and pass it a boolean value that is then passed to its child component instance.

Not being able to set the text or component or boolean state of nested components is killing me. In some cases I’ve just detached the nested instances so the parent could get the access I need, but that means I don’t get the benefit of updates if the nested component is changed.

It would be so much better if the properties of nested components were “bubbled up” from child to parent to grandparent, etc. You could show them in groups in the Properties section headed by the path to each nested component: 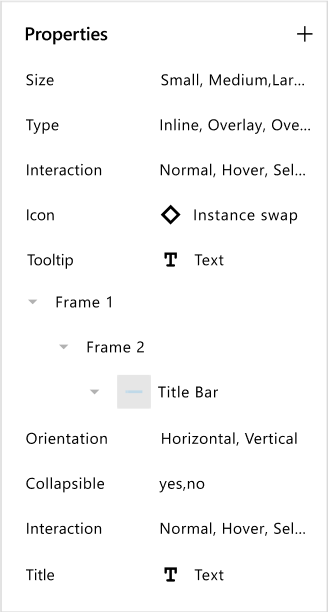 Might be a good Idea, as suggested by @Jenni_Merrifield to display them in the properties tab as groups of some sort.

That way, il would be really handy to tweek the different states of nested components.

Same issues here. This is critical.

Yes please! An absolute must-have for a complex component system.

please implement this, text property is not really usable like this

+1, this would be a very nice feature!

especially with the bonus of choosing what to expose.
Our design system would greatly benefit and reduce the complexity (and duplicates) if we could do this.

In my case I want to have a “master component” and then create different variants from it and use bools to show/hide the relevant properties for that variant. For now I either have that master component but lose the boolean “magic”, or use booleans but have more loose pieces and duplicates.

We also need the ability to pass variable values from parent components to child components. 3-5 levels would be enough.

I just discovered the new Nested Instances beta feature!
(And it took virtually no thought at all for me to jump right on to that bandwagon, risks of changes be damned!)

@Figma_Support - Please pass my extreme level of glee on to the developers.

I’m running into this limitation, too. Being able to expose properties from nested instances is the right direction, but I need to be able to selectively expose properties, rather than an all-or-nothing toggle.