Definitely, getting hangs, and stutters even while working with relatively compact projects.

I used an older device for a long time with files way bigger than the current, without these issues. Something changed in Figma lately that is causing quite serious performance issues.

Checking activity monitor I see no issues. CPU isn’t heavily used and ram is used quite limited due to chromes restrictions.

This device should really have no issue running Figma. It’s connected to a power source and a single 4k screen. Oh and yes, hardware acceleration has been enabled.

I get complete hanging screens in particular when I move my cursor near the close, minimize and maximize actions in the top left corner of the Figma screen.

Hi have the EXACT MBP 2019 full spec config as @Christian_Kramer with a 4k Asus ProArt and been having the same issues lately a weekish (cant pin point date) on both app and Chrome. Yes, plugged in, acceleration on, every other app possible closed. I thought it was the summer heat and got AirCon…not that. Then got a Caldigit TS4 dock… still same issues. As soon as I start moving a simple component , the kernal_task jumps to 700%-1000% CPU usage!. Maybe it’s the latest update… was not like this before. We need to figure it out. 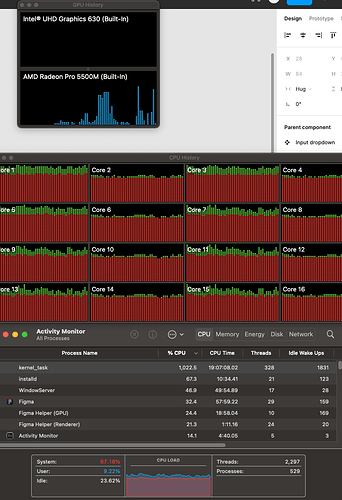 I’ve noticed slowdowns for a few weeks now, but I have no clue what’s the reason. It’s pretty severe, to the point where, when editing a textfield for example, the input is delayed by a second or so.

It doesn’t always happen but it tends to pop up when working inside components so I suspect it is related to that.

Try OSX Settings>Battery>Battery> Automatic graphics switching “Off”
This worked for me. Let us know if it works for you. 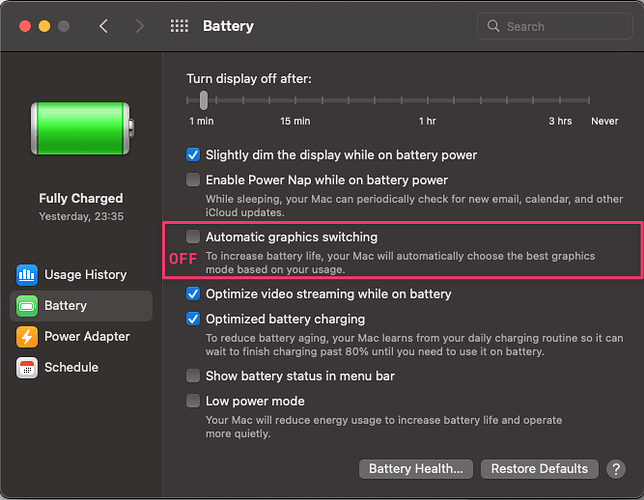 I have the same problem now. New PC laptop with all latest CPU and GPU and figma drops to like 10 FPS on 4k screen I have plugged into the laptop both in App and Web.
I need to work on much smaller laptop screen, drop screen resolution to 2k or have Figma in small window to use it.

Usage of both CPU and GPU jumps to 100% when doing anything. Performance worsen with resolution, the bigger window the worst it gets.

It was working fine on previous, 6yo laptop, so I’m puzzled.