Hello! The new figma boolean functions are way nice to cot down on the amount of things in the profiles.
I ran into a bug with the prototype previews though…
The “invisible” icons on my chips are not showing in the editor, but show behind the text in the mobile all (ios) preview as well as in the web prototype viewer.

Here is an example of the editor;

And here is an example of what it looks like in the preview. (both in the ios app, and the web preview)

It appears to still be showing the icon, with its color overrides that I had, but they are behind. I understand why they are where they are, but them showing up is not correct.

This is what the component looks like and how it is set up. 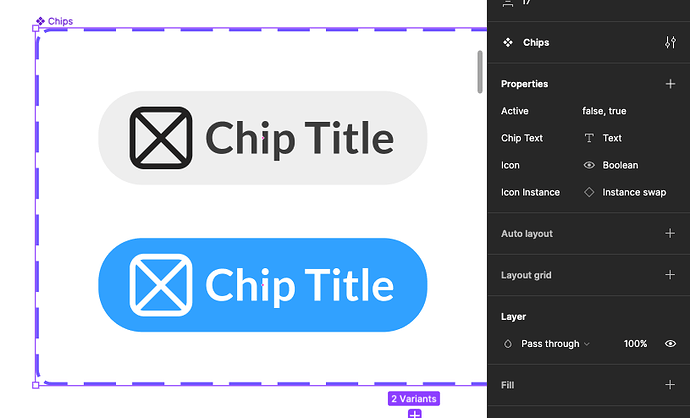 image815×494 24.9 KB
I have been doing these for a bit and feel like I have them set up as intended, and they work in the editor… just not in the previews.

I am having the same exact bug! I posted about it earlier today, before I saw this post:

I am experiencing a bug while using boolean properties and instance swaps on basic button component and am wondering if anyone else has encountered the same issue. I was looking forward to these advanced property features because it would cut down on a LOT of variants but these bugs are persistent and inconsistent. Figma engineers and product managers have tried to help me on Twitter but so far the bugs continue to occur. A screenshot showing the issues is below. The top screenshot shows the …

I tweeted about it last week and a couple of engineers and product managers from Figma reached out to me to share the file. It seemed like it was fixed but came back a few hours later.

I tried putting the instance swap before the boolean in the properties panel but that didn’t work.

Is it inconsistent for you as well? Like, some will show up, some won’t, randomly?

I found it worked when I reset the entire instance, and then turned it off.
HOWEVER if you change the icon from its default at all, it will come back up again and not disappear correctly when toggled off.

Yes, I have tried that too. One of the Figma engineers suggested running ’ ⌘ + /’ and selecting “Regenerate all instances (slow)”. This worked in one file, but not in another. And again, when duplicating the component or placing a new one and doing the boolean overrides and instance overrides it would happen again.

The issue doesn’t happen with boolean functions on text layers though. I wonder if it might be a combination of using boolean AND instance swap on a layer?

Yeah, that is what I am thinking. I have similar issues in a different ticket about the icons losing their shadow properties when one instance has the shadow, and the other doesnt. It works on the ‘default’ icon that is built into the component, but if I change that icon, the shadow gets locked either on or off.