An error ocurring when trying to unsert an image 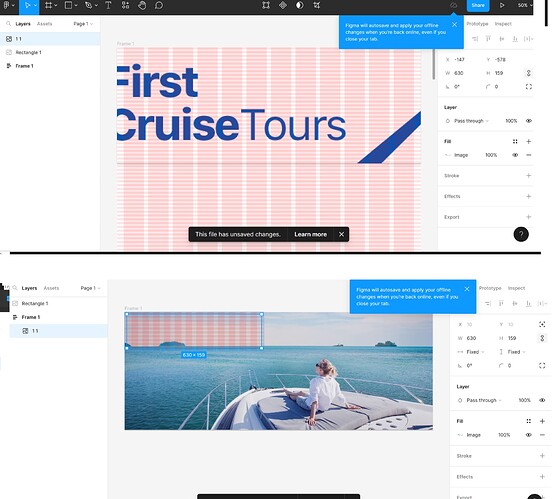 After selecting “Fixed” size on the right sidebar the frame doesn’t “hug” the second picture, but the problem with adding it remains. When adding second picture, it is behind the first one for some reason and also it has second frame in its borders now.

It seems you have a layering problem

Don’t add pictures, Drag and drop them into the Figma and then select and make it into a frame by hitting ( Ctrl + Alt + G ) and moving the frame into the first frame. That’s how I do it

your first frame is an auto layout and the second is not, So it can’t Hug the second even if it wants to.

On fixed, there is no Hugging.

Thanks for the answer! After I copied the picture the way you proposed, it is still like this - second pic is behind the first pic, and always snaps to the left height of the first frame. It can be set on other position only outside the first frame, if it’s inside I can’t move it.

second pic is behind the first pic, and always snaps to the left height of the first frame. It can be set on other position only outside the first frame, if it’s inside I ca

As I told you, Your first frame is in Auto Layout and when this feature enables all the content inside will behave as the auto layout settings

If you want to have fully custom-sized:

You can hold Ctrl and resize the frame, this way your content inside the frame won’t change size.

Also, I have noticed that your Frame 1 is not the same size as your Image, You can fix it by above solution, I gave you.

I suggest searching Auto Layout in Figma on youtube and watching a video of how it works to fully understand it.

If you need more info feel e free to ask.

Thanks again, it explains why the pictures snapped to left and to height. Though the problem with it being placed behind the first one remains. Option “Bring to front” doesn’t help. Why is this happening? What should I do?

As you can see there’s no auto-layout anymore. What’s wrong?

Try moving it up the layer stack. The stack is viewed from the top down. Your selected element is at the bottom of the stack so occluded by the content above

Thank you so much! It helped. For some reason it kept moving down past Frame 1 every time I moved it on Frame 1.