When running user tests (ie usertesting website) the prototype will consistently fail to load while multiple users are in the prototype testing.

I’ve had testers comment that they typically see issues when testing on a Figma prototype.

Will upload video of the issue when permissions are granted to me.

I am having issues with the testing protype loading as well. All of my flows are not listed, non of my hotspots work. No changes have been made to these flows, everything was working earlier today.

Oh my goodness that does not sound good. So you make the prototype, and it basically just doesn’t work anymore? I’ve not encountered trouble with the hotspots, just loading issues when a tester attempts to load a prototype.

I’m not sure if I can help at all, but I do know there are some options in the prototype you might fiddle with. Sorry I cannot be of more help. 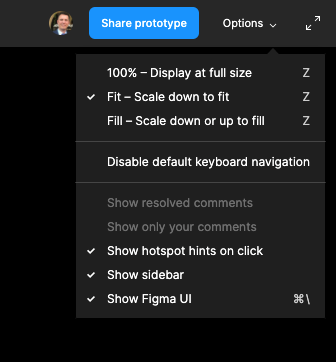 Figma seems seriously broken for prototyping right now, I can’t run user tests on mobile because all of my prototypes fail to load.

What’s odd is I signed in today and all of my links were not theres. I had to redo all of my hotspots. Simple fix at least just annoying. My prototyping is working fine now. Glad I didn’t have to redo my flows!

Hope y’all get yours up and running.

Oh no, hotspot wipes are awful, especially if you had some intricate transitions plugged in. You have my empathy. Glad it was simple enough to fix.

Ran more tests yesterday, there was a noted improvement. Prototype load times are still quite long.

I had good improvement yesterday, are you still getting load failures Oliver?

I believe I located the issue, when the apply a Device, say an iPhone X, loading the mobile UI in the prototype causes a massive burden on loading times. I noticed the test I ran yesterday did not have a device applied, so it loaded much quicker, with no failures. As soon as I applied a device loads and failures started to happen.

Short term fix, don’t apply a device to save your prototype from failing during tests.

Still having issues personally - it’s gotten so bad that I’ve started to move my prototype across to Framer. However I’ll try your solution below and hopefully that might help.