Never mind, I see you are on macOS. (was: Windows or macOS?)

Some time have passed and just wondering to see if there is anyone willing to come up with a feedback. Once again, I appreciate your thoughts. thank you. Andrew.

Is this the same issue as this one regarding the overrides? Preserve overrides in instances swapped inside component.

I don’t know if this answer the question or solve something. But i also had som issues with variations of a checkbox that doesn’t keep the override if i for example change state from default to selected.

I experimented a bit and noticed that when i changed all the names of the label text layer to “Label” instead of them having unique layer names i noticed that the override works when i change between variants. 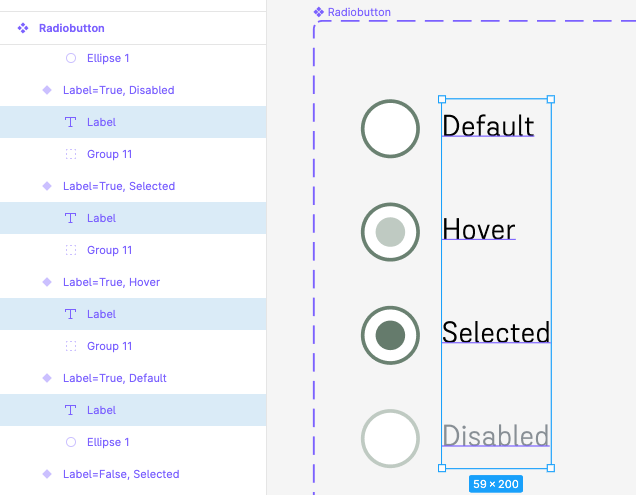 Yes @Joseph_Astorga - your assumption is 99.9% likely the problem. @Andrew16 needs to check every single variant’s layer stack and name to make sure they are identical.

@Andrew16 I tried to reproduce the problem, and I do not see anything wrong (aside from some minor shifting of text between states). Am I looking at the wrong area?

This is the link to where I am testing: 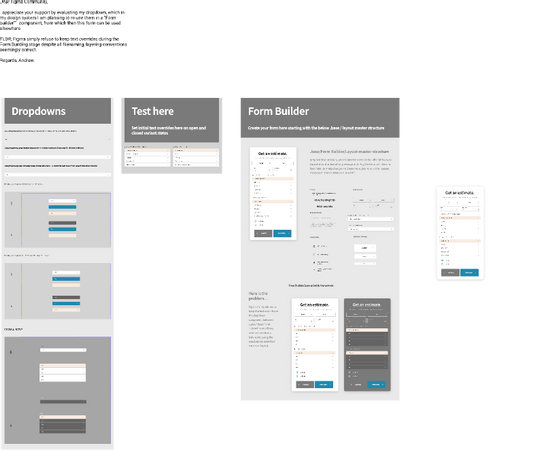 Use Comments there if that helps.

@Andrew16 upon deeper inspection, this may be the problem, as was suggested in the previous thread posts - the variant layer structure and names between variant must be identical.

In this example, the light mode variant for open and closed has a different layer structure.

Thank you very much for this, unfortunately, am beyond spent for the day. Will try to have a look at this tomorrow.

Here is a quick rebuild - not using styles or anything, but this is how I would build your menu. Dropbox - rebuild.fig.zip - Simplify your life

Dear Jono2 and all,

I believe I resolved it. All interactive states (grouped in their own layer) must also reside in all other instanced components.

My “RV” (shorthand for rollover state) state autolayout layer ~ somehow did not exist in the closed state. my mistake was that it was using an old component. I must have missed this in my hours of troubleshooting. So I went back to my base setup components and ensure that the correct roll over state layer exist and then hide/view them as necessary.

And it worked. the text overrides now working as it should. However took a bit a while (1-2 mins of) as Figma try to refresh dozens of screens of my design prototypes. But at last, all the text overrides in my dropdowns I’ve manually set in my Form Builder section of design system ~ now remain consistent to everywhere else exactly as I intended.

Jono2 thank you once again for your patience in this. Also thank you for providing me your proposed rebuild. You’ve done above and beyond for this. I hope I did not take away too much of your time.

Happy to help and glad you got this resolved. My request to you is that you keep an eye on this thread, and see if you can help the next person that comes along with the same problem. It can be daunting to fix - a needle in the layer stack if you will.

I enjoy troubleshooting things like this. It keeps me sharp and it helps me help my team when they experience similar problems. I am @JonoTRHC and @Jono_Young and @Jono2 somehow, due ot creating a number of Figma accounts in the early days of trials and demos. Wish I could merge.

It doesn’t work for me. not sure if im doing something wrong.

I’m trying to override the text in the hover state of a component. It works when I switch the design between the different states, but in protoype mode it changes back to the default label

It would be great if the structures didn’t have to be identical. It makes sense that the name of the layer is though. When dealing with slightly more complex components such as cards with specific auto-layout rules per card, the structure is going vary wildly. Maybe I’ve been using variants wrong.

I had the same problem with CTA buttons. Figma kept overriding the button text in different states. Renaming my layers solved the issue. Thanks a bunch!

SOLVED THIS ONE! MAKE SURE YOUR MAIN COMPONENTS TEXT IS THE SAME BETWEEN THE VARIANTS! FOR EXAMPLE IN BUTTON IN NORMAL STATE “CLICK HERE” AND A BUTTON IN HOVER STATE “CLICK HERE”. THIS SOLVES THE PROBLEM. SORRY FOR CAPS BUT I JUST WANT YOU TO SEE THIS.

I have the same issue (I think) not only for text but for any override.
I’ve been troubleshooting a bit and what I can reproduce consistently is:

On prototype the overrides are lost

I’ve been experiencing the issue with incorrect override behavior. Had to troubleshoot for a while and here is what I found out.

I have a 2-layer Button component:

I didn’t create a full list of variants for the Button component with the corresponding base layer variants, just the bare minimum (Text-only container, check the screenshot)

It appears that the base layer won’t override as long as you don’t create variants with all the base variants (re-read please, I barely understood what I wrote for the first time lmao).
Recreating variants for all nested variants solves the overriding issues. 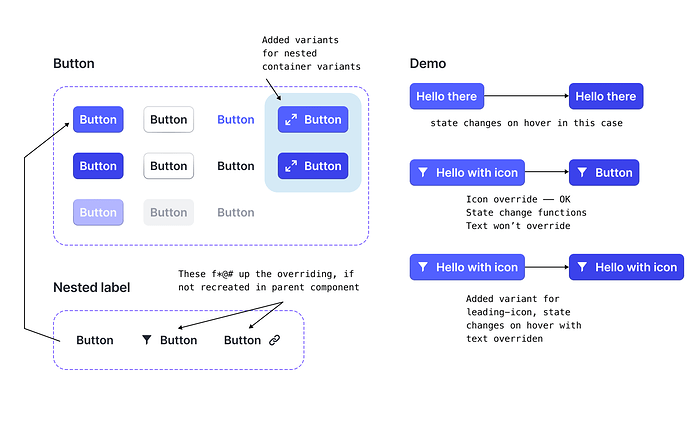 This is the best way to avoid this common problem:

Base components are heavily debated, and have their pros and cons.

I am 99% sure all of the base components, and component nesting, and overrides will be vastly improved in the coming releases of Figma, so it may not be wise to go all-in on complex ❖ component builds if you don’t have too. For example, when Tokens arrive, you’re gonna wish you have used tokens… and now you’re gonna’ have to go back and redo or update a TON of variants.

This worked for me! Thanks so much

So you dont really need to do anything too complicated like defining a .base whatever component, the only thing that needs to happen is that all the components need to exist in all the states, so dont delete them! just hide them!

Thanks so much for this, i was struggling with this for months!