Solved: Preferences aren't saved?! - Previously: The 'Use alternate zoom handling' is NOT saved in your Preferences!?

The new option to solve the weird zoom, can be enabled in the Preferences… but is not saved. If I close Figma and open it again… the option is disabled again??? 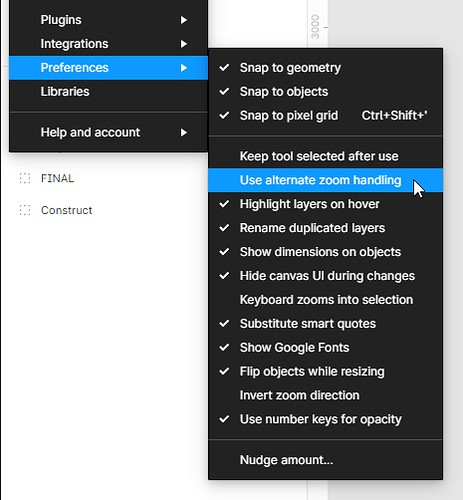 2 Likes
Solved - Zoom bug is back. Too large increments on Desktop version, weird ones in Browser version
Zoom with scroll wheel jumps too much
MakePixelsWork April 12, 2022, 4:34pm #2

I’m testing if this is an error in all of these settings.

So I decide to check and just disable the ‘Highlight layers on hover’ option, which was enabled in my version. 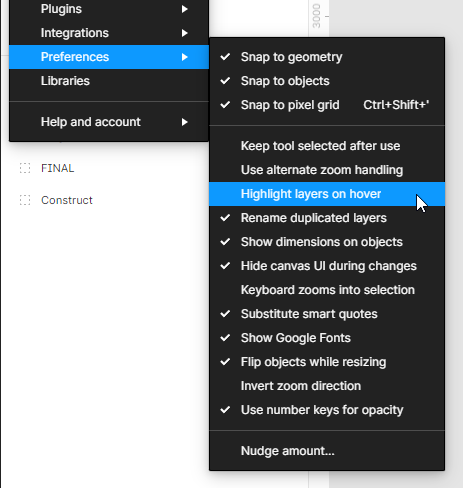 Now I restart… and lets see. 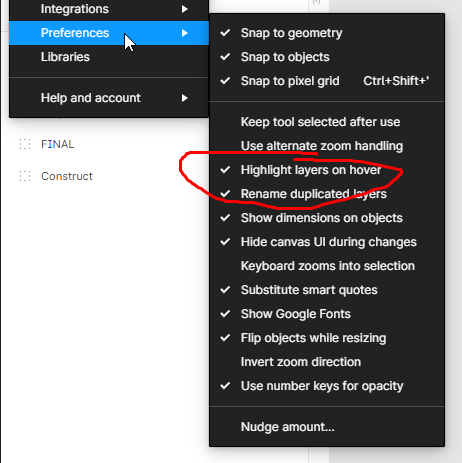 This means all preferences are NOT saved???

This needs some fixing!

I checked it with two others and both of these are not saved.

I’ve given up and did not check the other preferences.

Addendum
The in-browser version DOES remember preferences, but these are not shared with your desktop version. Maybe these settings can also be shared throughout your account, and NOT only per ‘machine’ ?

Why has this topic been changed? Its not a question for the community… its a bug in the system, which the community has no control over. The Figma forum should have a ‘bug’ topic, so we can report bugs.

Same, here, before about last week, i never had to use the option “use alternate zoom handle” and the zoom was fine, since then if i do not use this option the zoom jump in unworkable steps, such as 50% to 161% to 519%.

All return to normal with the alternate zooming option, but this one does not save as you described, and it is a ridiculous UX to have to switch it back on every single time i open figma.

Thanks for reporting this.

General discussion is not for bugs either, it’s for things unrelated to Figma (discussion of design in general). Bugs should be reported to support: https://help.figma.com/hc/en-us/requests/new?ticket_form_id=360001744374

Are you saying that user aren’t allowed to discuss bugs?

Where is the bug discussion section, would you mind pointing me to it?

There is no such section on the community forum because (as you said) community can’t help with bugs. So “asking the community” would be a more appropriate category because it’s like you are asking the community if anyone else has seen a bug like this and if anyone knows a solution, which is a completely normal thing to ask (but again, first things first, the bugs need to be reported to Figma). And it’s related to Figma directly so it’s not a “general” discussion. Hope this helps!

Ah, you are not the OP, in this case disregard the category-related things in my message, only the bug report & asking the community points are important in this case.

I’ve since reported it as a bug, through their bug forms. Its currently being investigated.

Plot thickens:
On request by the support team, I’ve installed the Beta version of their desktop app (currently 114.1) to see if that program does the same. But in that version the preferences ARE saved. So it seems solved in the Beta.

Then I checked if my current version 112.2 still did it, but for some unknown reason that one too worked again. Maybe because I installed the Beta?

So I uninstalled the Beta, expecting that 112.2 would return to its previous state, but it DOESN’T. My 112.2 version now DOES safe the settings. Maybe something residual stayed on the system after installing and uninstalling 114.1, but I can’t check. I did NOT restart my PC yet, so this may be different tomorrow.

Is this now solved? I’m not sure. It works for me… but would this path work for you?

PS:
While I do realize the logic in ‘discussing stuff with the community’, a bug which that same community can’t solve should in my opinion NOT be reported in a “Ask the community” topic… but rather a “Bugs” topic. For some reason this is not an option in this forum… and checking the topics available, General Discussions seems the best alternate.

It would be better if there was a Bugs topic, but maybe Figma doesn’t want people to talk about bugs, so didn’t provide said topic. This is also the reason they set up the bug report system. I just did not look hard enough for it, but its clearly available through the Help (?) circle on the bottom right of the desktop app.

“Based on your initial email I flagged this with the Desktop team and they found there was definitely an issue on our side which I believe they patched. My guess is that the fix was made somewhere along the line which cleared the issue even for the existing build version.”

How this works, I have no clue, because I did not update my 112.2 version. But maybe some of the preferences are stored on your account, and not on the local machine. I asked, cause I am interested, but for now… this seems to be solved.

I still have to check my Windows 10 machine, so I will keep this topic open for now.

@Chiali_Tsai > Maybe you can check on your end if yours also now saves your preferences? Then we can confirm its a global solution.

I’ve now tested it also on my Windows 10 laptop, and while the beta version of the program DOES save preferences, the normal version, DOES NOT save preferences. This opposed to my Windows 8.1 where for some reason, after installing and uninstalling the beta, it suddenly does work.

I’ve recorded some videos of this and sent them to support. To be continued.

It seem last week the issue was on and off, but i believe it’s been a few days i haven’t been noticing the issue at Figma startup …

Thanks for your help in reporting that problem and thanks to Figma for promptly resolving it. Great team work!

Actually, this seemed solved since my last update, but for some unknown reason, my Windows 8.1 version of Figma DID update to the latest version, but my Windows 10 version did not. So I still need to switch it on every time I open it on my newer machine.

I will add this to my bug report.

I spoke too soon. Now my Figma on my Windows 10 machine has also prompted to update, to version 114.3.

I checked if it saves its preferences and now it works! This solves this issue.

On auto-updating, the Figma representative told me;

“The app rollout happens over a period of a bout a week and so should be available to you on your Windows machine shortly. If you haven’t seen it by mid next week can you try downloading again from the Desktop App downloads page.”

So, I assume updates for different platforms and OS are rolled out during a week or so. If yours does not update, download and install the program again!

This post marks the solution for me, so I will close this thread as solved.