I want to merge these to components. How can I meke the stroke disappear on the spot that one shape touches the other? I have tried the boolean properties and they dont work. the below image is an autolayout. 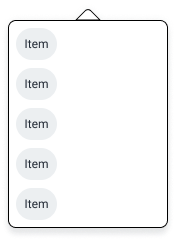 I could be wrong but it sounds like you are trying to merge a vector Shape (the rounded triangle) with a Frame that has auto layout. As far as I know, Boolean operations only work between two vector Shapes.

Also, you can use advanced strokes only on rectangle shapes whose vector points you haven’t modified.

There are many ways to solve it. One of them is to use the technique of the “drop-shadow stroke” to draw a stroke only on the top of the rounded triangle instead of a regular stroke: give the triangle a shadow with a negative Y equal to the stroke-width you want, and a blur of 0 to make the shadow look like a line.

Then place the triangle so that it overlaps a bit with the the rounded rectangle which will hide part of its top border. (and that way the triangle won’t move if your auto-layout list grows vertically)