In my example below I have a set of Logo Components: Logo / Figma and Logo / Microsoft.

I then want to duplicate the Master Component several times, and swap out the Logo Components with different variations (logos), in this case, swapping out the Figma logo for the Microsoft logo.

The problem though, is that anything other than the Figma Logo Component does not keep the increase in scale. 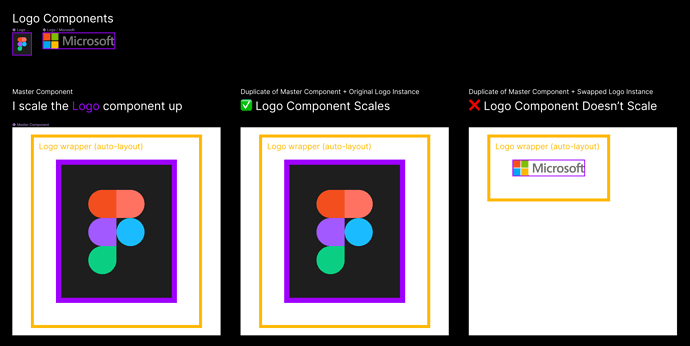 Essentially, I have a series of 15 logo files; all roughly between 80-100px in height and all of different aspect ratios. I want to use these logos in a component at 200-300% scale, and use the Instance Swap dropdown on the duplicates of that component to swap out the logos, keeping the scale set on the Master Component and the logos unique aspect ratio.

EDIT: seems like this is a very common issue, and a scale property would seemingly fix this.

Yes this is a problem Figma seems to be ignoring. Please vote here: Scale as a property