Memory overload when visiting a past version in the history

Hi, I am using Figma Teams for my organization.
The design project uses 0.7G of memory. I attempted to access a past version of this project from the version history, but I always get the “100% memory used - file out of memory” warning.

Has anyone faced this issue before? I assume there is 2G of space provided for each design project, so I hardly believe if I am overloading my design file by doing this…

Yes, I am also experiencing the same issue. We haven’t received the 65% or 75% memory usage warning yet in day-to-day use, but when I try to access any previous version it says 100% of memory is being used and I have to close the file and reopen it.

This morning I’ve opened my main file to get a red bar stating “100% of memory used”. There were no such issues yesterday, no prior warning about memory being low, nothing. Reloading page and restoring an older version didn’t help .

Eventually the file managed to open, but there are designs missing from it. I can only guess how much is gone, but I think it might’ve restored automatically to somewhere around the end of December. Interestingly, trying to restore a version from as far as September produces the same “red screen”.

I am happy to reduce the amount of layers by half if necessary, but I need my file as it was last night to do that.

I have the exact same issue. I have never received the 65% or 75% memory usage warning yet in day-to-day use, but when I try to access any previous version it says 100% of memory is being used and I have to close the file and reopen it.

I have the exact same issue. We can’t restore an older yet lighter version due to loading capacity reached. Any help would be greatly appreciated.

From your recommended link, the keys “Shift+Ctrl+Option” did not produce anything, what are we supposed to see when pressing them? https://help.figma.com/hc/en-us/articles/360038006754-View-a-file-s-version-history#Restore_from_version

After that, you will see a context menu in which you need to click the “Restore from version” item. 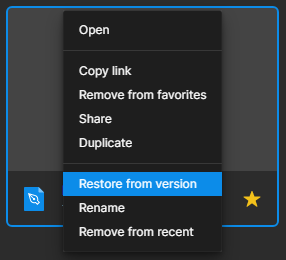 The keyboard shortcut did not work. I was able to fix my issue though.
Recap: Several versions could not be restored and would get stuck in loading mode with memory capacity warning. I closed the window, reopened the project to most recent version. I opened view versions history. On the right panel, I right clicked on desired version history and clicked “Duplicate”. I found that the duplicated version was again showing the most recent version. This is a bug. I went on duplicating older versions that would again show most recent version from today. I continued duplicating even older versions until I was able to get an actual duplicate of older version from 3 days ago.

The duplicate feature allowed me to inspect older versions, and identify the desired version to restore. It was the only path I found to override the memory warning banner and loading freeze.

I was able to restore the desired version from 3 days ago.

Had the same issue and reported in another thread.
Tried some of the same things and opening in a web browser allowed me to restore an older version.