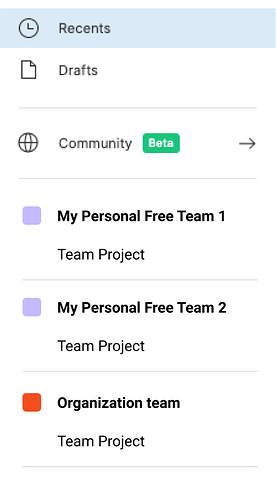 Hi all, couple of months ago i was added to a organisation plan of a company i was freelancing for, but via my personal email (gmail) address which i use for figma. And team projects appeared right underneeth my personal Teams and i was able to move the drafts into the org tream projects (see the pic mockup). The job was done and i left the organisation.

Now, few months later i was added to another company organsation team projects as editor, also via my personal email address, but Figma created a new fully workspace no drafts so now i have to migrate a lot if huge fig files with export → import. I would like to aviod that.

And it says under that Workspace (Guest).

is that “modus operandi” something new in figma, or my Team admin can change some settings so that new org team appears under my own workspace, unrderneeth my own teams. please see pic.

Thank you all in advance.

No, Organization is a separate space so it can’t appear together with your other teams. Export → Import is the only way to move files to the Organization (but also you can ask Figma support, they may be able to assist).

understood, it also seems that way to me, but as i said, 2 months ago it was working somehow. It could be that the first company never assigned me as a team member, but rather as an outside editor maybe? strange. but it is what it is.

The only problem is sometimes import export is missing some images, saying thumbnail error then i also have to reimport images as well. But that is another story.

Yeah import/export isn’t always lossless. And Figma support can often help move the files in a lossless way, as far as I know.