Interactive Component not working in overlay

Hi Axel1, No, technically, they are not considered as an “interactive component” as the overlays are not “Components” and they are just Auto Layout elements floating on the side. They are not a variable. I originally had them as part of the Variable, however this didn’t work so I had to (A) Separate the variables into separate Components, then (B) Ungroup/detach the Variable to create them floating overlays.

So basically, whatever your overlay needs to be, it can’t be part of a variable in the component, nor can it be a Component itself. Hope this makes sense.

I had sort of similar problem. My case was that I created component interactions with prototype opened. I needed to close and load the prototype again (not just pressing R in prototype) to get interactive components working.

@Cindy2 - Good workaround. Another hiccup though is that if the component was used in other pages, the overlay doesn’t work. It works only if they’re in the same page unfortunately. Have you experienced this?

Hmmm, I can’t recall as this project has now been put to bed, but, if I had to guess, it looks like the overlays cannot be components, and that you have to detach them for it to work. That’s probably not much help though but sometimes I found starting over again seems to work.

Hello,
Pretty much the same issue as @kdeebee here.

So I make dropdown menus, ie language selector, where every list item is an instance of the same interactive component to manage a hover state.
Whereas using overlay or switching with variants, this works great !

Then I gathered all these menu elements into the dropdown menu.

For the configuration of the animation of the dropmenu, I use overlay from my frame, because I need the overlay feature that is, if I click anywhere else on my frame, it closes the menu.

But I also want the menu to deal the active element on the top of it.
Then, if I switch the language, I want the chosen language to appear on top.
So I taken into account all the UX configurations here on my menu element. 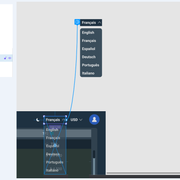 But then, I noticed that the overlay wouldn’t take into account the different variants of my menu!

I can switch from “Français” to “English” the first time.
But when clicking to the active element “English”, it does not display the menu, instead it replaces with the word “Français”, because of the overlay.

So basically, I’m left with 2 choices:

Should I have done this differently to have the best of both worlds?
Thank you very much! 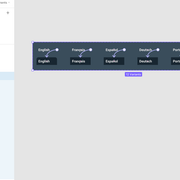 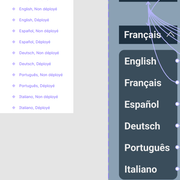 I am still running into these issues 1.5 years later. If I create an overlay interaction at the master component level, that components animation will not work on another page. It will only work if the instance is on the same page as the master. This seems to be very specific to overlay animations. Does anyone have a workaround?

My specific example:
I have an option button that, when clicked, pops up options. I have a components page where all instances of this item reference on a separate page for user flows.

I am experiencing the same issue. Having the master and instance on the same page is a workaround but somewhat sloppy. Any ideas on a better fix?