Hi all, quick question to check my premises based on what I’ve been able to figure out on my own…

I have teammates who have Viewer-Restricted roles in Figma Design and Editor roles in FigJam. In our Team, they have Can View permissions, which as expected prevents them creating new files in the team. However, if a user is a FigJam Editor, should they not at least be able to create FigJam files within a Team?

I know the seats are free for the rest of the year, but knowing they are going paid in a matter of weeks, I would hope that there will be a way for those users to create FigJam files in any teams which they are members of.

Am I overlooking something?

Answering my own question…

Further experimentation and testing this morning has revealed that setting a user in a Team with FigJam Editor permissions to “Can Edit” DOES in fact allow them to create FigJam files in that Team. However, when you set a user who does not have Figma Design Editor permissions to “Can Edit”, Figma displays an error message next to their name stating that they won’t be able to edit until they are upgraded: 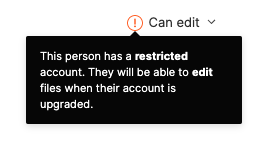 This is very confusing, because it is not accurate - hopefully the Figma team has plans for how to message around this scenario in a more accurate and helpful way.